Dr V Balu was a noted artist and a peace activist who was killed in a road accident yesterday evening, in Bangalore. Almost 80, he was full of life and bursting with ideas, it is hard to imagine he is no more.

Although, he began his artistic career as a cartoonist he found his calling in paper collages. Vivid collages made out of scrap paper transformed magically into works of art. These were often abstracts but sometimes recognizable forms also crept into his imagery. In any case his workmanship was always flawless. All his collages had an underlying message - peace. ‘Rhythms of Peace’, a brilliant collage with girls dancing amidst a swirl of ribbons is a fascinating piece of work. His art always brought a sense of calm and tranquility to the viewer. 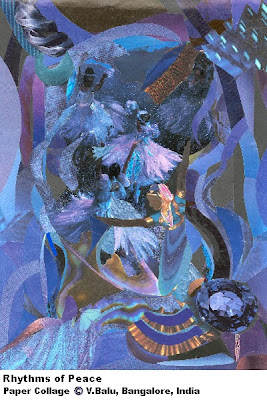 He was not a conventional artist in the true sense but he found huge acceptance and encouragement everywhere. The Dalai Lama and the Archbishop Desmond Tutu also had words of praise and appreciation for him. Strangely enough, some people from the art fraternity did not consider him mainstream, but I don’t know if that bothered him at all. An endearing quality about him was that his visiting card invariably carried an image of one his collages and a calendar at the back! Passionate about peace, he was man on a mission. He wrote books and traveled extensively to propagate this message.

I met him last at a book launch and promised to visit his studio soon. Unfortunately, that will not happen now.
By Nalini Malaviya
Email ThisBlogThis!Share to TwitterShare to FacebookShare to Pinterest
Labels: Indian Art

He was a great artist and a great person.

Hi Nalini - I hadn't heard of his demise and am so sorry to hear that. I have collected a few of his wallet sized calendars that he used to present everytime he saw me at some event or another. Such a pity...

Please visit Dr. V. Balu's exhibition on at Chitrakala Parishath in Bangalore from 26th- 30th Dec 2008 from 9am to 7pm.
His Collages and Oils are on display.