I wrote the following article for Times of India, Bangalore as a round up of art shows in the city. An edited version appeared in the print, here's the original...

It has been an interesting year in terms of the art shows - the number has gone up considerably as compared to the previous years. Also, there is growing trend in favor of group events. The beginning of the year saw more than 200 works from fifty artists all from the Southern region. ‘Mapping the South’, a traveling show it came to Bangalore after successful stints in New Delhi and Mumbai. It showcased drawings, paintings and sculptures from well known artists such as Adimoolam, Gopinath, Haridasan, Laxma Goud, Milind Nayak, Muralidharan, Nandagopal, Palaniappan, Vishwanathan, Balan Nambiar, Thota Tharrani, Vaikumtam, SG Vasudev and Yusuf Arakkal, all under one roof, it was quite an impressive list.

Many group shows were organized by lifestyle stores in order to make decorative art available at affordable rates. The emphasis was on creating pleasant wall art for the average buyer, and from what one hears such shows have been very successful. Over the year, a number of artists from West Bengal exhibited their art ranging from the conceptual to the stereotyped rickshaw pullers from the streets of Kolkata. Belonging to the first category, Abhijit Gupta, Chhatrapati Dutta, Paula Sengupta, Riddhi Narayan Nandy and Sujay Mukherjee presented new media and conceptual art - installations and assemblages that evoked a mixed response in the city. While, a group show by artists Asit Kumar Sarkar, Ballari Mukherjee, Dhiren Kumar Saha, and others presented the many flavors of Kolkata - the inevitable rickshaw pullers, ancient monuments, temples of Kalighat, crows and the milling crowds on the streets. In yet another curated show, eleven artists from West Bengal presented a fairly eclectic collection where some of the works were interesting while others conventional and stereotyped.

In an exhibition titled ‘Image and Imagination’, a group of artists from various states presented paintings and other mixed media works. Anindya Roy, Dilip Kumar Chowdhury, Prafulla Dhanukar, Ramesh Gorjrala, Rabin Mondal, Sohini Dhar were some of the artists out of the twenty-six artists participating in the show. In ‘The Annual Show’ organized by Galerie Sara Arakkal works by forty Indian artists came together - mostly figurative and some abstracts, it offered an interesting variety in terms of genre and style, however most of these artists have been regulars on the city’s art scene.

Bangalore artist SG Vasudev revisited his earlier paintings from the 60s and 70s such as ‘Maithuna’, ‘Tree of life’, ‘Earthscape’ and others and represented them in today’s context. Some of the other solo shows included artists, Sanjay Bhale Rao, Somenath Maity, KK Raghava and Shankar Kendale. 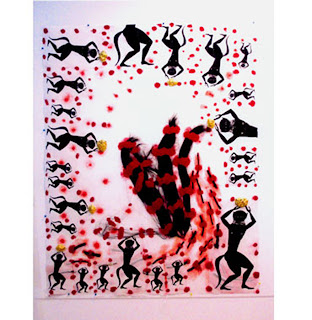 And, finally, here are some of the shows that were exciting and different. Noted artist Atul Dodiya exhibited for the very first time in Bangalore and his mixed media works with paper pulp were titled ‘The wet sleeves of my paper robe (Sabari in her youth: after Nandalal Bose)'. His interpretation of Sabari’s tale based on the epic Ramayana and set in contemporary times was simply mesmerizing. Rekha Rao celebrated her move from Mumbai to Bangalore and her canvas came alive with Rangoli colors, garlands and spices. From pot-holed roads, incense to sign language, she touched on a variety of subjects. Artist Rathin Kanji’s works based on global issues such as human trafficking, global warming, terrorism and war crimes and other contemporary topics, were also very interesting. Lastly, Bangalore based artist Ravikumar Kashi continued to experiment with urban themes in his present series of paintings. In the next few months, Kashi will take his paintings to US and London. Here’s looking forward to more such art shows in the city.
By Nalini Malaviya