There have been no new posts for some time as I have been down with flu... However, I did attend a talk by artist Haku Shah at Alliance Francaise, which was interesting even though bad acoustics made hearing quite impossible. It was delightful meeting Haku Bhai, a humble and down to earth personality, and seeing his digital prints and black and white photographs. The prints were based on a Gujarati fairytale of Manapari, while the photographs on folk and tribal art. The following day I went for the preview of his paintings that was held at another art gallery. His paintings have a simplicity that is rare and endearing. 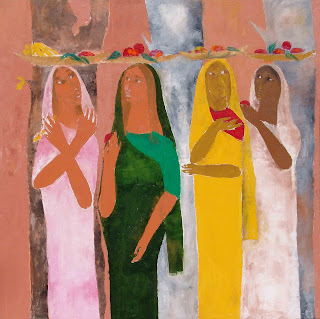 Considered to be an authority on tribal and folk art, Haku bhai's paintings portray his closeness to tribal art and culture. A human figure playing the flute, a cow or a tree in the background, a bird perched on a person’s hand, are on the surface simple subjects that seem to be inspired by rural scenarios. The images are flat and have a narrative quality despite uncomplicated images and a minimalist look. However, there is a building of layers and a deeper thought process involved that make his works special. Aesthetic and tranquil, his protagonists appear to be far removed from the urban chaos and turmoil – they stand unaffected amidst peaceful surroundings at one with nature. Born in 1934 in Valod (Gujarat), Haku Bhai completed BFA and MFA in Fine Arts from M S University, Baroda and was awarded the Rockefeller Grant (1968) and Nehru Fellowship Award (1971). In 1968, he curated the ‘Unknown India’ an exhibition organized by Dr. Stella Kramrisch at the Philadelphia Museum of Art.

(some of the text has been published in Financial Times, Bangalore)
By Nalini Malaviya