Bangalore based artist M Shanthamani’s recent works are a take on the city’s phenomenal growth and evolution from a sleepy garden city into an IT capital. The dramatic metamorphosis -even as Bangalore makes a mark internationally, has inspired Shanathamani to take a closer look, beyond the glitter of wealth and progress and explore the ‘side-effects’ of this tremendous transition. Using hands, symbolic of a working class that slogs for more than eighteen hours a day, she questions the direction this economic growth is taking. As an involved viewer and also a bystander to this transformation, she comments on the cultural impact, the shift in mindsets and the lifestyle changes. The artist also analyses the effects of being brown-skinned, the apprehensions associated with outsourcing, and ambiguities that affect Bangaloreans. In a non-judgmental manner, she presents the underlying myths, the stresses and the controversies.

Shanthamani points out how the history of the city is getting lost or amalgamated in the newfound IT status. In the race for power and riches, other aspects of living have been lost. Finally, we are valued for the labor we provide. Is the city losing its identity? The whole controversy of outsourcing, and the insecurity that it has bred abroad - how much are we a part of this decision making process that affects our lives and our existence? Shanthamani’s paintings analyze and present the socio-economic aspect that defines Bangalore today. 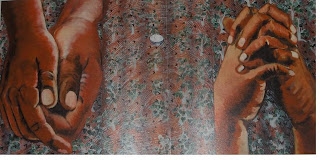 ‘Working class hero is something to be…’ words by John Lennon aptly describe the gigantic hands symbolic of the community that finds identification only through its work. Shanthamani explains, “I’m talking about being reduced to a pair of hands, constantly working for economic reasons since your product is removed from personal, cultural and spiritual moorings…. We’re removed from living. We now have only two mantras: Work and Money.”
‘The most precious thing in life don’t cost anything’ has a bowl of rice set against agricultural land in the backdrop, and stresses how we are distancing ourselves from our agricultural roots and adopting urban vocations. At the same time, it is a reminder that happiness depends on some of the most basic necessities. ‘Made in India’ done with paint and thread on cloth, reiterates the demand that exists for the traditional - a lost art in the West. A violent picture of a woman burning with two soldiers on either side, discusses fragmentation, strife and violence in today’s times. According to Shanthamani, it is also about the fear and insecurity of being a South-Asian, and facing suspicion from the West.

“Circus of Life” portrays yoga mudras to highlight the search for tranquility and spiritualism, while on the other hand street children perform acrobatics to make a living. “Pixellation’ narrates the story of the destruction of Bamiyan Buddha in this digital age.

Shanthamani insists the exhibition is not about opposing growth, but about recognizing and understanding what is happening. Large sized canvases almost like billboards help make a point. Gestures that are typically Indian add context to local issues against a global phenomenon.

(The exhibition is on till February 23 at Gallery Sumukha, Bangalore)

- Published in Times of India, Bangalore
By Nalini Malaviya

Hi Nalini, I enjoy reading your articles in the Times and am happy to have tapped into your blog. Keep up the good work.Regards Mini