Tangerine art space has launched itself with a group show featuring works by fourteen artists. According to Leena Chethan from Tangerine, they zeroed on these fourteen artists after months of research, deliberation and screening with the help of art critics and advisors. All artists except two are still studying at various art schools across the country. Tangerine claims to have found “…14 of India’s most phenomenally talented young artists” whose “…works are affordable and still poised for a quantum leap in value in the foreseeable future.” Despite these tall claims, unfortunately, some of the works are bad, with blotched up paint and poor compositions. On the plus side, a majority of the works are skillfully rendered, display good technical skill, and also deal with interesting concepts. Swapna Biswas’s series of three paintings interestingly juxtaposes animal figures with self-portraits to accentuate the existence of human and animal instincts within a person. An inverted tiger next to a crouching figure of a woman illustrate the interrelationship of conflicting emotions in man. Using bold primary colors her paintings are well executed and have a striking effect. 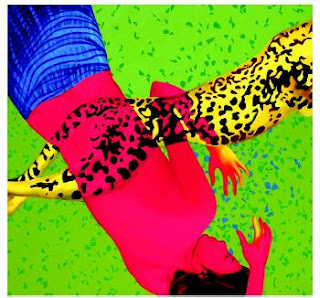 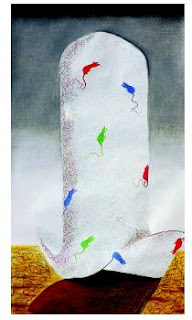 Anil Kumar offers unusual imagery in his ‘Magical hat of colonial king’ and ‘Public call’. All his works have been done with pastels on paper. Reji Arackal has a humorous take on ‘operations’ – with wrestler like figures slicing at different fruit. An acrylic painting of an exaggerated figure of a woman holding an ice cream stick looks ferocious, and at the same time has a child like glee on her face. The artist likes to combine local motifs and objects in his paintings. Pierced eyebrows and earrings are meant to be pure decorations, probably to emphasize the feminine side to a wrestler like woman. Another still life with a huge jackfruit – bright green and exquisitely detailed is placed next to a couple of apples has an unusual effect. KS Sujith paints a surreal picture where animals and humans cohabit in a bright, vividly colorful and painstakingly detailed world full of foliage. Gigantic reptilian figures overlook the tiny monkey like human figures.
Benitha Perciyal’s mixed media works are fairly abstract and appear to have philosophical leanings. ”I didn’t drunk from that well’ (yes, that is how it has been spelt), defies description; it probably has something to do with water conservation, but sadly makes little sense. Lochan Upadhyay’s works are in black and white (charcoal drawings), with a sofa that has excessive detailing, while ‘Inside outside’ has drapes suggestive of physical boundaries. A graphite on paper work by Lokesh Khodke combines still life with meticulous detailing for an interesting effect.
Then, there are a couple of street scenes with flat images and people engaged in different activities while a young boy looks on from his vantage point. Most of the other works are average or worse. Interestingly, Tangerine will be actively promoting most of their artists and is also in the process of working out a buy back scheme from their clients at existing market rates. Prices range from Rs 10,000 to Rs 1.35 lakhs.

The exhibition can be viewed till Feb 7, at the Karnataka Chitrakala Parishath, Bangalore
(Published in Times of India, Bangalore)
By Nalini Malaviya