Bangalore is surely catching up with Delhi and Mumbai when it comes to the number of art shows happening in the city. Anjana Kuthiala, a Delhi-based artist, is displaying her recent works in an exhibition titled ‘Anarkali Reborn’. Then there is a group of artists from West Bengal who have come together as part of a gallery’s anniversary celebrations.
Anjana is a former Miss India who later turned to a career in painting. She is known widely for her numerous drawings and paintings of Shah Rukh Khan. In this series, Anjana attempts to pay a tribute to a forgotten legend and presents the new millennium Anarkali. According to the artist, the paintings celebrate the Indian woman as an embodiment of love, beauty and spiritual power. The paintings centre on aesthetics and beauty – the protagonist in this case, Anarkali, is beautiful and wide-eyed as she appears poised and graceful against various backdrops. Large almond-shaped eyes and perfect lips - they remind you of the Rajasthani folk paintings that you often see at the Chitra Santhe.

(The exhibition is on till February 22 at the Welcom Art Gallery, Windsor Manor Hotel)

The other show has an interesting collection, which features names like Paritosh Sen, Suhas Roy, Jogen Chowdhury and Sohini Dhar, amongst others. The exhibition offers an intriguing amalgam of different genres in contemporary art. You can see traditional tales retold, allegories that bridge between reality and fantasy, and even glimpses of surrealism. The romanticism of Suhas Roy’s Radha, and Sita Haran by Bijon Chowdhury have a folk touch. Flower and Moon is a still life by Manoj Dutta, while Old Kolkata Afternoon by Subrata Gangopadhay has been rendered in a realistic style that evokes nostalgia with its charming portrayal of women spending their afternoons together. Sanatan Ninda’s Introduction - Next has a sculptural quality in its textures. 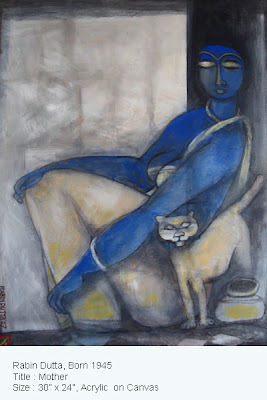 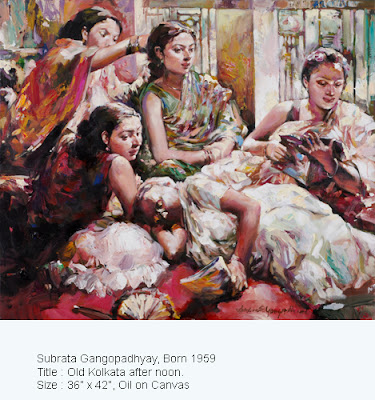