A few months ago I was in Baroda and when Rameshbhai Pandya, retired professor from the department of fine arts, MS university, found out that I was in town, he very graciously invited me for a preview of an art show at Sarjan Art Gallery. I reached the gallery half an hour after the specified time (in fact quite early according to Bangalore standards) and was surprised to find the place jam-packed, where everyone knew everyone. This despite the fact that there were no cocktails but only tea and snacks (Gujarat is a dry state!). In any case the retrospective exhibition of paintings and sculptures by Ahmedabad based Piraji Sagara, a founder member of Progressive Painters' Group was a delight to see. In a non-conventional approach, the artist had used different mediums, combined them and presented figurative as well as non-figurative works. The 1931 born artist took the trouble to take me around and to show me each of his works and explain the various nuances associated with it. Wood, metal, beads, he had experimented with various mediums and textures. A very interesting show!

Back in Bangalore, I visited artist Jasu Rawal at his studio, who is incidentally also from Gujarat (born 1939), and completed his MFA from M.S. University, Baroda. But he has been living in Bangalore for several decades. Jasu bhai as he is fondly called is a fine artist and a fabulous human being, and he known in the city for his abstracted landscapes that often combine elements of still life. He, in fact, recently had a retrospective exhibition of his works spanning 40 years of his career. He has been awarded twice with the Karnataka Lalit Kala Academy Award in 1972 and 1980. This particular exhibition was organised by Ananya Drushya, where the photographs of his paintings were displayed at the gallery premises. Now, Ananya Drushya is an organization that aims to create awareness about visual arts in schools and other sections of the society. Readers will remember that about two years ago, the visual chapter of Ananya had started with a group show, where seventy artists from the city had contributed their paintings.
This is a great initiative but it needs more focus and probably greater involvement from its members to make the Karnataka arts scene more vibrant and to be able to reach out to a larger audience. 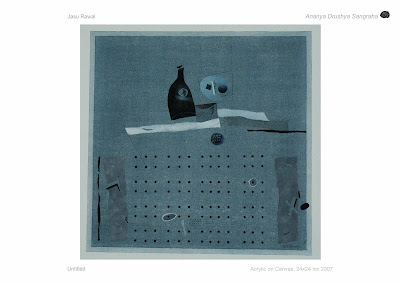