I first came across Reghu’s sculptures about four years ago. Tiny ceramic figures that were based on groupings of men, women and children in animated postures caught my eye. Simple, earthy and quite minimal the figures seemed to be suspended mid-air while depicting various emotions. What stood out the most was their innocent child-like charm. Reghu hasn’t changed much over the years but his sculptures are now larger, they sport a ‘glaze’ finish, and there is a lot more variation in the grouping of figures. The artist comes from a traditional agricultural family, and his sculptures are also inspired by rural lifestyles and traditions. One can even say that his art is an ode to the Indian villager and celebrates their indomitable spirit as they go about their daily existence. Mother and child, or the entire family, cows, and heads of men and women form some of his sculptures. The simplicity and the banality of everyday life that he depicts characterize his figures. At the preview these sculptures were arranged in a garden where they formed a charming set of artworks. In fact, some of these figures reclining on chairs are quite amusing to look at. Devoid of embellishments, the small figures and also the larger sets strike a chord with their rustic appeal. 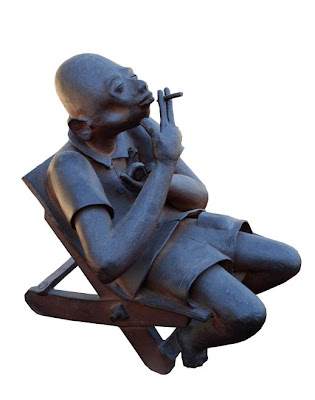 Reghu’s style of working involves sketching out his sculptures in detail through drawings. He then follows essentially the coil technique to create the figures, which he then fires in a wood kiln, and uses special techniques to obtain a glossy or a glazed look. He incidentally is a graduate in sculpture from the College of Fine Arts, Trivandram and although he began with stone as a medium, he later moved on to working with indigenous materials. He was closely associated with J. Swaminathan at Bharat Bhavan, Bhopal and that has also strongly influenced his works.
His sculptures have no doubt evolved over the years and he has experimented with bronze as well. However, one hopes to see more variation in his choice of theme and the medium in future.

(An exhibition of his sculptures was on till March 26 at Time and Space Art Gallery, Bangalore)