Sculpture by the Sea

Last week, I talked about Reghu and his sculptures. And, coincidentally, a press release that came to me recently from Australia was also about an art fest held there in the month of March. At the fourth annual Sculpture by the Sea, Cottesloe exhibition in Perth, the Cottesloe Beach was transformed into a sculptural delight. The event featured 54 entries from Western Australian artists and invited artists from across the world (12 other countries) for instance Iceland, Japan and India. This happens to be Australia’s largest outdoor public exhibition of contemporary sculptures, and in fact there’s another one coming up - ‘Sculpture by the Sea’ in Bondi, Sydney, in October.
Now, the Indian artist who participated in this show was Abir Patwardhan, a sculptor who studied at the M S University, Baroda, and lives in Pune. He, in fact, exhibited his sculptures in Bangalore last year with a show ‘Prayer for the Porcupine’, a delightful series of whimsical works done in beaten copper. In Australia too, Abir’s work, ‘New Beginning’, was very popular and was bought by a local buyer. Good for Indian art. 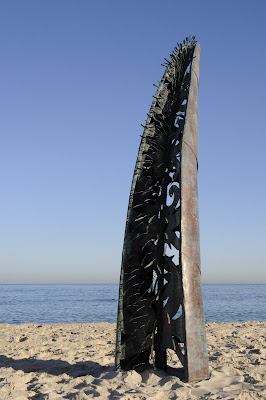 Abir Patwardhan's 'New Beginning'
An open air exhibition of sculptures sounds like an extremely exciting prospect both for the artist and the viewer. One sincerely hopes that the concept of a project like this can be replicated or adapted here.
Strangely enough, I read that this year during the Harmony show in Mumbai, no awards were given to the emerging sculptor category. Apparently, the reason given was that there were no good quality competitors in that segment. What a pity. Where have all the good sculptors gone?
Sculptures are now gaining more acceptance as an investment instrument and artists such as Subodh Gupta and Ravinder Reddy are doing exceptionally well at international auctions. Most sculptures by well-established artists translate into good money, comparable to that of paintings. However, at the micro-level, the problem with sculptures is that you have to find a suitable place to display them. Size can be a major deterrent and unless you live in a sprawling bungalow, it is an impossible task to find an appropriate location for a decent-sized sculpture. Also, sculpting requires special facilities to be able to work with different materials and media. It takes more time and effort to create a sculpture. It is no surprise then that there are a lot more painters than sculptors in the country.