Till Death Do Us Art

“I want to display a person dying naturally in the piece or somebody who has just died,” declared German artist Gregor Schneider on an online publication. “My aim is to show the beauty of death.” I came across this recently. The ultimate performance piece screamed the headline! Disturbing, grotesque, and shameful, were some of the epithets heaped upon the artist from readers worldwide. However, there were a few isolated voices that believe it is the ultimate form of art.

It makes one wonder, can the act of dying before an audience; qualify as a form of art? On one hand, my conservative and probably somewhat saner side is repulsed and disgusted at the thought of reducing death – the final act - to a stage performance. On the other hand, I’m reminded of other such artistic performances and installations where artists have used dead animals, meat, urinals and grotesque paintings to create art, which they believed in.
Damien Hirst immersed a 14-foot tiger shark in formaldehyde in the work titled ‘The Physical Impossibility of Death in the Mind of Someone Living.’ It is considered iconic. In 1917, Marcel Duchamp created ‘Fountain’ using a urinal as Found art. And, then you have Jana Sterbak, a Canadian artist, who likes to use meat to construct her artworks.
These are some of the instances of bizarre or untraditional artworks that often find critical acclaim but fail to find universal appeal. 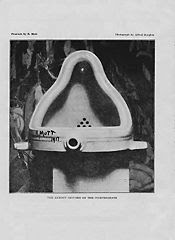 For long we have associated art with aesthetics and beauty, but now in an age where reality television shows compete frenziedly to outdo the other, it seems a few artists too are joining this mad rush. How much more bizarre, shocking and monstrous can one get, seems to be the mantra. What can we do that has never been done before?

And, while some believe that this is the height of innovation, creativity and original expression, I suspect that these are in the minority. The majority of public finds such ventures attention-seeking gimmicks and publicity stunts. For them, it is difficult to comprehend that behind such acts lies a genuine intent to break boundaries and redefine new media art.
Our years of conditioning is such that it is hard to be totally accepting. What I can do on my part is to be less judgmental and remind myself that unconventional thoughts eventually lead to innovation and even invention.
But then, even as I write about this the hunt for a volunteer to die for this exhibition probably continues…