Are these prices real?

Many young artists are hiking their rates to ride the global price tide you see at auctions. But this won’t pay in the long run, says Nalini S Malaviya

A recent report made out a convincing case that Indian art is undervalued at the moment and prices will go up in the future. Is that true? If you ask the uninitiated, the answer will be ‘Indian art is already over-priced and there is no logic or sense in the million dollar deals that take place regularly, particularly at auctions’. Auction prices apart, most people find it hard to digest the prices of art even in the primary market.
Analysts look at prices from a global perspective based on which prices may be low compared to Chinese or Western art, but the fact remains that Indian art’s climb in the recent past has been spectacular. And, there’s no denying that now it has become unaffordable for many.
One of the problems that have come into focus in the recent times is the many artists trying to ride this wave by increasing their prices with every show. While this is valid for some of them, based on their performance at international shows, buyers find it irritating that students and new artists also price their works exorbitantly even in their first or second show. What they need to remember is that if they raise their prices too soon and too much, they will not be taken seriously by an art collector.

On a slightly different note, I expected more reactions to my earlier column (Till death do us art) about the German artist who was planning to use ‘death’ as a stage performance, as part of his art exhibition. Readers did react to it, but mostly on my blog and that too when I had first reported the event with a link to the original story. But strangely enough, my write-up about Badrinarayan’s drawings seemed to have irked a few readers. Now art, of course, happens to be a very subjective matter, where you may like something, which I may not and vice versa. I have also mentioned in the past, how the definition of art is expanding, and it is not always about aesthetics and beauty. But in this particular instance, what one needs to appreciate is the emphasis and efforts at popularising folk art traditions. You probably know that most folk arts such as Madhubani, Pithora, Warli, and Chittara are on the decline. Badrinarayan’s art may not be immensely cerebral but his usage of clean lines in a folk art style while presenting Indian folklore is quite commendable. Incidentally, his art is also popular at the international level. 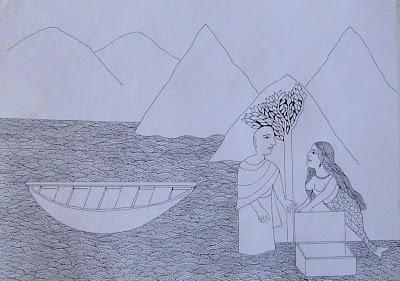 Bravo!!I just waited for this reaction from a expert like you Nalini, actually i have wondered at mumbai expo when got to know about 1lac per sqr ft of a young artist, thought came to my mind, then what will be his latter part of art life? will he become the richest person of the world in money or what?no quality, not a single social message, not even a sollution, then why should people pay such a high to artist? why we respect those so called intelectuals?hehe questions will be appreciated and we'll never find a answer, becose they have money , they have people to works for money, but i like to say them here, these fake hype and all other strategy may give them a temporary success, but it'll never establish them as a master artist, only those businessman will make money from them and when downfall come they will thorw out and will pick another for sure.Thanks.

Thanks for your input! I feel the biggest challenge for young artists in a hurry, is whether they can sustain themselves in the long run.
All eyes are on Indian art but that also means that buyers are going to scrutinise quality before shelling out the dough. Well, the good thing is that not all artists are in such a rush!