(Nalini S Malaviya)
The art scene in the city has picked up considerably over the last couple of weeks. The last few days went by in a whirl of activity for many of us, visiting a variety of exhibitions – photographs, paintings, installations and mixed media.
Two exhibitions that have ended but are worth mentioning are - the wild life photography show by M N Jayakumar that has been extensively covered and written about, and it was truly quite spectacular. There were some wonderful snapshots from the wild. Then ‘Silent Symphony’ featured pen and ink drawings by artist Babu Jattakar who incidentally is a faculty at the Applied Art Department, Chitrakala Parishath. The black and white landscapes were presented in a conventional style. They were excellent - pleasant compositions and affordably priced. 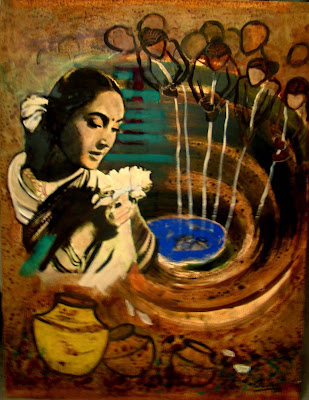 Another show, ‘Artists without Boundaries’, features a group of women artists from across the country. With names like Arpana Caur, Rekha Rao, Asma Menon, Gogi Saroj Pal, and Naina Kanodia among others, it seemed promising. But the collection could have involved a larger body of works, which would have offered greater insights into each artist’s oeuvre.
Rekha’s painting was a little different from her earlier series as it added a figurative element – a film poster - to her abstracted backdrop. Portraying the social issue of untouchability, Rekha has drawn from the legendary film actress Nutan’s defining film ‘Sujata’, also based on the same theme. Naina Kanodia’s works are delightful, with their photograph-like visuals. The figures always appear to be suspended in time, surrounded by their abundant worldly belongings. Arpana Caur presented Guru Nanak in her signature style, while Gogi Saroj Pal’s works have been painted with greater abandon than usual.
The exhibition is on at Renaissance Gallery for another week.
Meanwhile, Kaleidoscope 2008 kicks off today, featuring assorted works by various artists. It is on at Kynkyny art gallery till July 19. 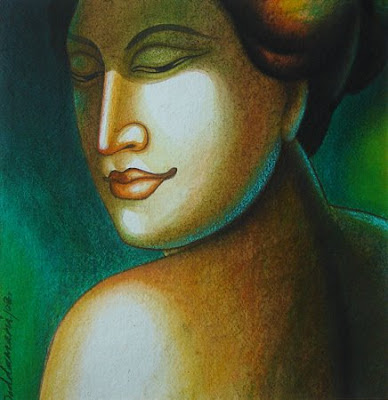 And, finally I want to say I am delighted and touched that last week’s column has enthused at least a few photographers who are now keen on exhibiting their fine art photographs. I look forward to that.