Recently, I came across a few artists who are taking photocopies of their paintings and selling them as prints. Buyer should not confuse these with traditional forms of limited edition fine art prints, which are produced with specialised techniques and have an investment value, as well. Fine art prints involve creating an image on a surface (called a matrix) and transferring it on to another surface, usually paper. Wood, metal or stone are commonly used as matrix in printmaking techniques. Print making usually involves a manual process to transfer the design onto the surface. Woodcut, lithography and etching are some of the methods used to produce a small number of multiples.
Offset printing on the other hand involves reproducing the original, and can produce a large number of copies.
In printmaking each print is numbered and signed by the artist, which also denotes the edition size (total number of multiples) and authenticity of the print. Traditionally, the block used to transfer the design was destroyed to prevent further copies from being produced.
Printmaking is an involved and labour intensive process and one finds that most trained printmakers are now moving away to different mediums which are either more rewarding in terms of creativity or financially. 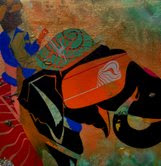 Talking about prints, I went for the preview of “Walled Expressions - Untold Tales”, an exhibition of paintings by the Jaipur based artist Mukesh Sharma. Essentially a printmaker, Mukesh’s recent oeuvre comprises of colourful imagery that weaves a narrative reminiscent of a painstakingly designed patchwork quilt. The intricately spun visuals borrow elements from Rajasthani art, miniatures, murals and folk arts amongst various other aspects.
Folk motifs from Rajasthani art, block prints from Sanganer, and rich colours from the desert come alive on the canvas. The geometric fragments along with swathes of brilliant colours and detailed motifs are juxtaposed seamlessly to form a kaleidoscope of imagery.
A fusion of people, practises, traditions and rituals his paintings capture the transformation that has occurred due to urbanization and present an amalgamated picture that is slowly evolving. A blend of ethnicity and contemporary, the paintings echo the dichotomy which is hard to ignore. Artists are invariably drawn to the socio-cultural effects of rapid development and progress, and interpret these in diverse forms. With a master’s degree in Fine Arts from MS University, Baroda, Mukesh works as a freelance artist. 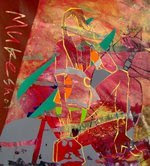 The exhibition continues at Olive Beach till 22nd of September, Bangalore.