A historic sale by Damien Hirst

Who wants to spend on cadavers?

Damien Hirst has astounded everyone with the phenomenal results at the Sotheby’s auction held last week. £111.4 million! That’s right, he made that much in the sale that was spread over two days. For those of you who are familiar with the works of the flamboyant artist, you must have seen pictures of animal cadavers preserved in formaldehyde solution or those of dead butterflies pinned and painted upon. Well, this particular sale showcased 223 works done in the last two years and the auction was dedicated to a single artist i.e. Hirst. "The Golden Calf," a white bullock preserved in formaldehyde, with hoofs and horns made of 18-carat gold and a gold disc crowning the head went for £10.35 million. 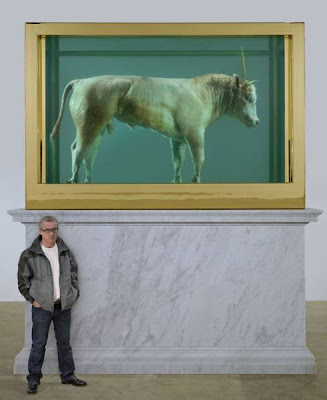 In fact, in what was a first, Hirst took his works to Sotheby’s directly sans galleries and dealers, which means he collects their commissions too. Taxidermist, publicity monger - these are some of the epithets that have been heaped upon Hirst, as his choice of medium and marketing strategies have always been controversial. Art market analysts were skeptical if the sale would be successful at all, but then Sotheby’s and Hirst went all out to woo prospective buyers. A genius whether in marketing or creativity, well, that is debatable.
And, now that a recent research claims that looking at beautiful paintings can actually alleviate pain, one wonders why one wants to place cadavers in their immediate environment and look at them!

Silent verses
In stark contrast to Damien Hirst’s avant-garde art we have an exhibition of paintings titled ‘Silence’ by the city based artist MS Murthy. Murthy’s works are minimal abstracts with tiny specks of light. Formless and almost austere the paintings are monochromatic panels of earthy colours that evoke a sense of calm and tranquility. His works appear to be spiritual in their minimalism, and one feels stillness and a sense of quiet when looking at them. Vast spaces that flow seamlessly create an aura of solitude and serenity.
His earlier series on the Buddha was also non–figurative, with expanses of colours streaked with irradiant light on the canvas.
Murthy has won the International Biennale Award (2003) from Iran Academy of Arts in which he represented India. 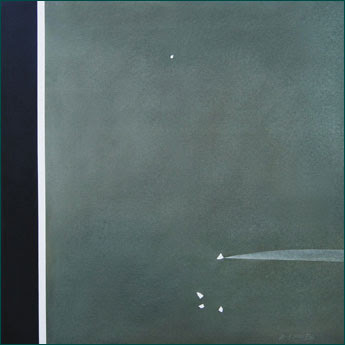 (The exhibition can be viewed till October 5 at Times and Space Art Gallery, Bangalore)