Last week’s column on reproductions of paintings as an affordable form of art appears to have touched a chord with many readers. Some of them wrote in to say that even though such paintings were not original their beauty and aesthetic appeal was unmatched. Very true. And, especially when one considers the prices. Today, despite the recession and the slowdown in the art market, prices of paintings are beyond the reach of many people. That’s also explains the popularity of an event such as the Chitra Santhe, the annual art bazaar that is held in and around Chitrakala Parishath for the last few years. Incidentally, this year’s Santhe will be held in late January, 2009 and not the last Sunday of the year as was the tradition up till now. The USP of the Santhe lies in the fact that is an open air informal art mart that is easily accessible to all. There is a wide variety and all kinds of art – from fairly good to downright appalling. There have been numerous discussions about having some kind of quality control, but apparently with that many participants and the Santhe atmosphere that is aimed at, it is not a practical option.
In any case, let’s face it, how many people are willing to walk into an art gallery just to look at art? Most people are intimidated by the gallery environs and sometimes the attitude of the staff also doesn’t help. Well, the Santhe does offer an excellent opportunity to get familiar with art over the day and then decide what one wants to buy. It might also be a good idea to have art appreciation lectures or seminars in conjunction with the Santhe, but most probably the logistics of it might prove to be daunting. Still, as an idea it has it merits, it will help prospective buyers gain some basic knowledge about art before making an informed decision. The group show by artists from Delhi and Rajasthan that previewed last week had some interesting paintings. The large panels by Bhagat Singh were quite popular with the guests, beautifully rendered and pleasing. Immensely symmetrical and intricately patterned - the overall effect was very agreeable and soothing. Madan Meena’s abstracts with matrices of golden and silver circles also created a harmonious impact. Titled Lotus ponds the works were minimal in their approach. Manoj Kachangal abstracts were colourful and appeared to be inspired by some of Raza’s works.
Both Ritu and Anoop Kamath’s paintings were figurative but very different from one another. Where Ritu’s paintings have a greater visual appeal, Anoop’s works seemed to portray sardonic humour and a satirical touch. 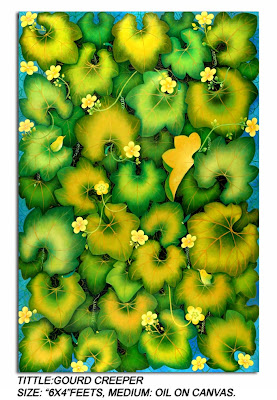 (The exhibition is on till January 7 at Crimson Art Resource, The Hatworks Boulevard, Bangalore)

Hi Nalini ! Thanks so much for appreciating my work!
Regards
Ritu