Miami Art Fair
The International Asian Contemporary art fair ‘Art Asia’ will be held at Miami later this week and Bangalore based artist Ravikumar Kashi will be showing his recent works there. Ravi is known for his experimentation with various mediums and in this fair he presents his photographs from a series called Snanidhi Series. In the past, Ravi has worked with new media and assemblages that have dealt with issues of urbanization and consumerism. In fact, his paintings used images from media to depict global issues that are equally relevant from a local context. Ravi has a Masters degree in printmaking from MS University, Baroda, and in English from Mysore University. 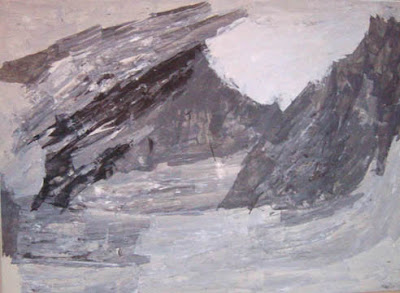 A ‘Modern’ show
Last week I attended the preview of an exhibition by Modern artists - FN Souza, SH Raza, Akbar Padamsee and Ram Kumar. There is a single Bindu work and a few other abstracts by Raza, nudes by Souza, and two works by Ram Kumar. The one in muted shades is a beautiful piece of art, and its photograph just does not do justice to the original. Raza, who now lives in Paris, is famous for his paintings that centre round a circle or Bindu as a creative energy force that permeates the entire universe, while Souza’s paintings are intense and known for their strong bold lines. All the four artists are well known names in the Indian art world and have also received widespread global recognition. 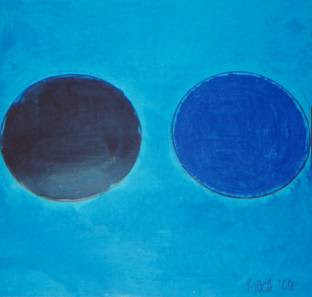 India Art Summit 2009
The first art summit was held earlier this year in Delhi and had elicited mixed response from art connoisseurs. However, most visitors had agreed that it offered an excellent platform for networking and it was high time that India had its own art fair that could be at par with international levels.
The dates for the next art summit have been announced and it will be held from 19th - 22nd of August 2009 at New Delhi. This year too will see Seminars and Talks with speakers including curators, critics, artists, collectors and representatives from museums and galleries. Plans are on to create a sculpture park in order to offer participants and visitors an art fair like ambience. Art films, education series and social events will also be held for visitors. One hopes the summit is able to garner support from all quarters given the current economic crisis affecting all markets.

An overwhelming response of more than 8000 participants from 115 cities of India coming from the huge range of age, profession and cultural groups has motivated us to take the entire movement to the next level.When such an over whelming number of people join a platform, then there is an obvious need to make the platform larger.

the organisers of the Rang Rasiya Freedom of Expression Movement feel immense pleasure to introduce and welcome you all to a global Artist Networking Portal. Please join our artist's community at http://freedomofexpressionmovement.ning.com/ . We aim to make this community a platform which enables artists to interact with each other, exchange ideas around art making, viewing and showcasing. All this is just a part of our endeavour to make the Freedom of Expression Movement, the largest ever platform for artistic talent.

All of you have not yet participated in the competition log on towww.rangrasiya.com and chase the spirit of Raja Ravi Varma.
Let's come together and make a difference an Art Way.