Narrative Movement is a group of artists from Shantiniketan who is organizing its first show in Bangalore. Gopa Sikder, Kousik Roy, Monoj Poddar, Pratyusha Mukherjee, Ram Kishu, Subrata Mete and Taslima Akter form the seven core members who are currently studying in their final year Masters programme in Fine Arts. These young artists bring in a raw energy in their paintings that are mostly figurative in genre, where some images are dark and surreal, while others romanticise spaces. What one notices is that most of the works involve a complexity in narration and go beyond the superficial decorative content. What is also interesting is that all these works are very different from the traditional format that one is familiar with from this region. It is good to see young artists exploring diverse themes, concepts and media. 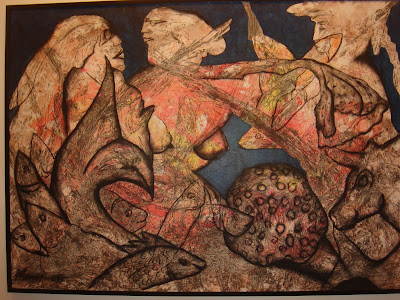 Gopa’s imagery is surreal with animal forms overlapping with elements from nature in a vividly colourful world. Kousik’s imagery is dark and intense on one hand, whereas in “Innerview” he presents bright details of a bustling world reflected on the lenses of a pair of spectacles. Monoj’s mixed media works on canvas and board are intensely compelling with their complex narratives and overlapping forms. Pratyusha’s dreamscapes create a fantasy world around architectural spaces. Ram’s works depict figures from everyday life, while Subrata’s figures are also inspired from everyday life but involve a more multifarious approach. Taslima presents interiors and spaces in a romanticised form. The group presents a refreshing range of art that also happens to be affordably priced.

The exhibition was held at Gallery Mementos, The Chancery, Bangalore.

There is yet another gallery - Inspirations that will open its doors on January 4th with an art show that will feature paintings by 12 Indian artists. The works were in fact created at an artists’ camp held last week between 24th to 28th December, at the gallery premises. The art camp was inaugurated with a great deal of zest and the gallery appears to be well stocked with prints, reproductions, traditional paintings and other art.

The film ‘Rang Rasiya’ based on the legendary artist Raja Ravi Verma, a 19th century painter is set to release on January 23. To create interest in the film, a nationwide art competition has been organized on a massive scale. Anybody over the age of 18 can participate in it and there is more than Rs 25 lakhs in prize money involved. Details are available on http://www.rangrasiya.com/. Incidentally, the competition will be held on an all India basis with regional centres in Mumbai, Delhi, Kolkata, Thiruvananthapuram and Bhopal.