Elephant on the wall

As one turns towards Opus from the BDA circle, an elephant dressed in pink and blue sneakers grins cheekily, striking an incongruent note amidst the traffic snarl. This rendition on the wall is the work of graffiti artist Ivan Germon. Ivan, from France has been spray painting on public walls for the last sixteen years. As a teenager, with a spray can in hand, he began leaving his signature on walls at night. At one point after his arrest and subsequent trial, the situation altered considerably and he was invited to paint on designated walls in France. Ivan also does paintings – acrylic on canvas and illustrations when he is not doing graffiti. 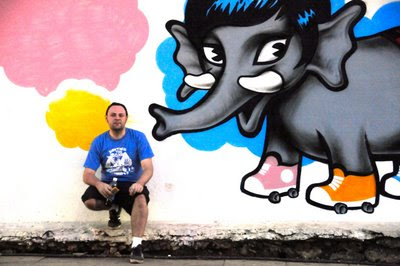 Ivan has modified his modus operandi and now, very often, he paints on large rolls of paper and then sticks them on the wall. Most of his paintings are of cartoon or popular characters, keeping in mind the cultural milieu of the place. For instance, he has spray painted Chacha Choudhary and Shaktiman in India. For the wall on Opus, for which he was incidentally invited to paint upon, he chose a brightly dressed up elephant which was bound to attract a lot of attention, and the slogan he has used is derived from Horn OK Please, seen so commonly on the back of trucks. He feels that these are elements that the common man can identify with and relate to easily. He signs off as Rock, and has taken the trouble to sign in Kannada as well.

According to Ivan, nobody would notice an ugly wall on the street, but, a brightly coloured one will definitely catch the eye. In big cities, where ones existence can go unnoticed, a signature or some writing on the wall is a way to get attention, and that is what most graffiti artists are doing when they paint on a wall in the darkness of the night.

Incidentally, what is graffiti? Letters or images that have been marked, scratched or painted upon any property are termed as graffiti. In most countries defacing public walls is considered vandalism of property and is an illegal activity. However, in the recent past, graffiti as an art form has emerged slowly, although it continues to be a topic of debate.