Art exhibitions in the city - Bangalore

Slumdog inspires artists
After the movie Slumdog Millionaire captured the imagination of many at the Oscars earlier this year, it is now inspiring visual artists, enough to dedicate an entire exhibition to it. According to Crimson art resource, “Slumdog Millionaire is a story that any one in the world can identify with. It is a story of rags to riches, optimism amid adversity, ghetto-to-glory. It is a story of love until death do us part. It is a story about people who rise above their circumstances, who are given nothing, who create a dream and become somebody. It is a story of survival, of hope, of destiny and of dreaming big.” Well, titled ‘Big Dreams’, this particular exhibition portrays works by 14 artists who attempt to present their aspirations and ambitions on the canvas.

GR Iranna, KT Shivaprasad, Murali Cheeroth and Babu Eshwar Prasad are some of the artists participating in this show. The works explore urban dichotomies, everyday realities, and consequences of mindless development. Hope and aspirations of people caught up in this web are also dealt with in some places. Slumdog or not, what makes the show interesting is that it is thematic and the most of the works have been created specifically for the event, which adds a thread of commonality that makes it more cohesive.


Incidentally, I must share this piece of new with you, Murali who lives in Bangalore but has shown mainly in Mumbai and Bangalore, is a part of the “Passage to India Part 2 – from the Frank Cohen Collection” which is ongoing in UK. His works are being featured alongside biggies such as Subodh Gupta, Jitish Kallat, Reena Saini Kallat, TV Santhosh and Thukral and Tagra.

(The exhibition continues till April 30, at Crimson - Hatworks Boulevard, Bangalore) 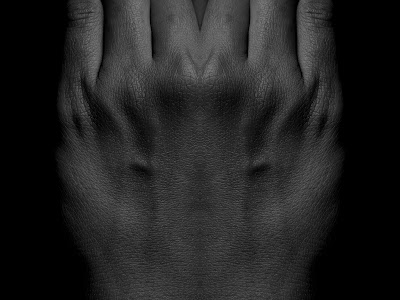 Shibu Arakkal continues his tryst with photography and his recent series focuses on the human skin. Training his lens on to various parts of the human body, Shibu has come with some poignant and some disturbing images. Using a format where motifs recur, Shibu replicates the images to produce a set of stark black and white photographs. As Giridhar Khasnis, who has curated this exhibition, says, “With Skin, the young photo-artist seems to have scaled yet another creative peak. In this series, Shibu explores the landscape of the body through a language of silence.” Having worked on this project for two years, Shibu has attempted to capture various textures, contours, colours, aberrations and beauty of the skin.

(The exhibition will be held between April 16 - 22, at WelcomArt Gallery, ITC Windsor Manor, Bangalore )
(Published in Bangalore Mirror)
By Nalini Malaviya