(By Nalini S Malaviya)
A car completely covered with copper trimmings and intricate designs is not a common sight. But, this is exactly what you see when you arrive at Sara Arakkal’s gallery in Whitefield. The gleaming copper reflects the afternoon sunlight, highlighting the elaborate patterns that have been so painstakingly worked upon the body of the car. Artist Yusuf Arakkal’s brainchild; he has spent the last five years in conceptualising, designing and converting his old Fiat car into a work of art. There is an interesting story behind this car. Arakkal reveals, “I got this car – a 1956 Fiat Millicento in 1986 in exchange of a couple of paintings and a sculpture from art collector Harish Padmanabha. It so happened that Harish came over to collect the paintings and we decided to have a drink to celebrate the occasion. On the way we stopped at the car workshop and the moment I saw this champagne-grey coloured car I just fell in love with it. I asked Harish if he wanted to sell it and he agreed. We settled for it and I drove back home in this car.” 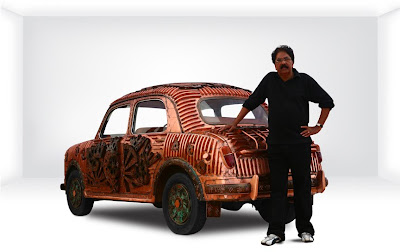 This was Arakkal’s first car in Bangalore and understandably, he has been very attached to it, and when it started to wear out, he was reluctant to part with it. Fortunately, the artist in him took over and he decided to convert it into a sculpture-cum-installation. As he wanted to retain the original classic shape of the car, he toyed with several ideas before deciding to use copper sheets to cover the car completely. Not an easy task as the final product had to be artistic as well as aesthetic.

According to Arakkal, almost a ton of copper has gone on the car in the process of altering it. A team of highly skilled craftsmen have worked on it for the last few years. A pattern inspired by wheels has been used on either side of the body of the car. Synonymous with the mobility of the vehicle and as a symbol of development and progress, the wheels are also inspired by a series of paintings Arakkal did in the 1970s. Special care has been taken to retain the patina of copper and several coats of sealant have been used to protect it from oxidation or weathering effects.

This converted vehicle - an artomobile is soon going to Delhi and will be showcased on the lawns of a new art gallery. Well, one thing is certain, this car is sure to catch your eye.