Colours of Celebration by Sakti Burman 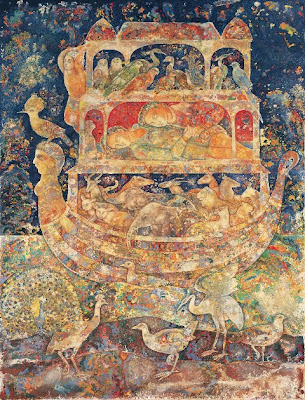 Sakti Burman is celebrating his 75th birthday in style. An exhibition of limited edition prints titled The Complete Collection of select paintings produced by the eminent artist in the last two decades is being showcased. The serigraphs have been produced in collaboration with Lavesh Jagasia from The Serigraph Studio.

The veteran artist born in Bidyakut, which is now a part of Bangladesh has been living in France since the mid 1950s, but now spends a few months every year in New Delhi. He recalls that the life of an artist was not so easy in those days and when he went to Paris in 1956 to study at the Ecole Nationale Superieure des Beaux-Arts, he did not know anyone and his paintings helped him to build bridges with others in a foreign land. He says, “I too veered towards the great masters in the early years and fell under the influence of Bonnard, Matisse, Chagall and of course Picasso. Just to stand before their canvas was to experience the unreal. It was so far removed from my life in Bidyakut.”

(The exhibition continues till March 10 at Gallery Sumukha, Bengaluru)

Hi, ur blog is really nice & informative, while reading it I truly like it. I just wanna suggest that u should submit your blog in this website which is offering very unique features at cheap prices there are expert advertising team who will not only provide the adspace but also promote ur blog & affiliate ads through all over the networks which will definitely boost ur traffic & readers. Finally I have bookmarked ur blog & also shared to my friends. hope u have a wonderful day & !!happy blogging!!.