Abhilash Sivadas (born 28th Jan, 1985 in Muvatupuzha, Kerala) is a Bangalore based artist, photographer and graphic designer. He has over the years acquired a style best described as magical realism with an emphasis on symbolism. Abhi’s exposure to Philosophy and Symbolism spurred his desire to look inward for subjective truths. His paintings are essentially an attempt to present his perception and understanding of social issues and philosophies in a contemporary manner. He says, ‘For me, my paintings are a way to present the truth about life, and in the process I am discovering myself through others, and others through myself. I intend only to engage the viewer’s intellect and evoke a reaction.’

In an attempt to further his style of painting, he has explored a variety of media, techniques, and subject matter through which he has managed to capture in his art, subjects from figure and landscape to nonobjective abstraction. He believes that being receptive to visuals be it in the form of painting, sculptures, music or movies has helped him present a different perspective through his art.

Abhi had his first exhibition at Chitrakala Parishad Bangalore, and is currently displaying his works in various galleries across India. He is represented by Gowri Arts in Kerala. Abhi currently works out of his studio apartment in Bangalore, where in addition to painting; he indulges in playing the violin, clicking photos, creating short films and designing.

The human mind is conditioned to the environment that it belongs to and for the same reason ever so often, people choose to not look beyond the cave that they are forced to live in. Social conditioning ensures that be it imperialist or consumerist policies of society/nations people are willing to live with it without even treading to look beyond it. In this painting, the wall with the window represents the mental block that conform people to such conditioning, and what is shown as the world outside is a representation of what life could be. Life could be as beautiful and joyous as a spring morning, if only we allow ourselves to look beyond all the norms that we force ourselves to live in. 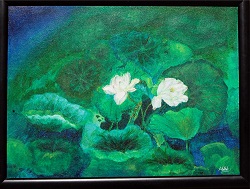 It does not matter where you come from, it only matters what you make of what you have got. Rising from the muddy physical mire at the bottom of the pond and floating on the water, it represents how material life passes through the surging waters of emotions, and blossoms in the fresh attitude of new life, looking towards the open skies of spiritual inspiration.  The lotus flower which is a symbol of much mystic also embodies life in the four human worlds: the physical, the emotional, the mental, and the spiritual. The lotus also captures beautifully the cycle of life & death, birth & re-birth, signifying the eternal promise of renewal and of continuation.

Great Profile and the works are truly amazing. Since he is displaying his work in various galleries across India, I would suggest you to have look at saffronart.com. It's online art auction house and currently showcasing words & lines auction. Do check out. It will help him.