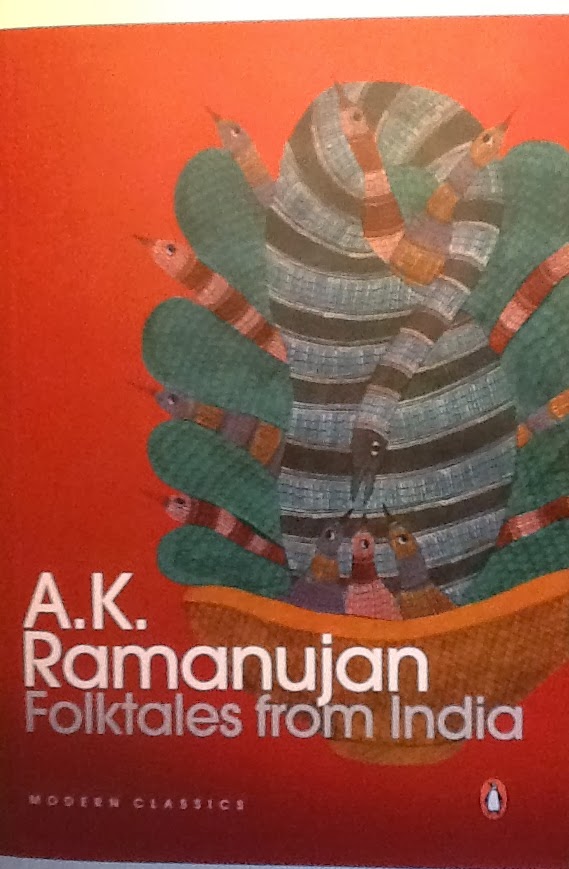 Folktales from India by AK Ramanujan, is a selection of oral tales from 22 languages offering a delightful platter of one hundred and ten stories originating from different parts of the country, yet sharing a collective ethos which is bound to resonate with every Indian.

As the well-known poet and author, Ramanujan describes it; the book presents ‘examples of favorite narratives from the subcontinent’. The selected tales are from actual tellers, rather than from literary texts and some were personally collected or recollected by him.  Essentially, these are then stories which have not been published in English earlier.  Readers interested in Indian folklore and culture will be aware that Ramanujan has contributed immensely to these subjects.

A scholar, author and folklorist, he published significant works on both classical and modern variants of literature in several regional languages and is widely referred to in folklore studies. Given the author's  credentials and scholarly contributions, this book becomes an important effort in documenting oral traditions and folklore. For several years I have been planning to read his books but had an opportunity only now.

The introduction by Ramanujan helps in contextualizing the stories from the perspective of a folklorist - to understand the context and function of a tale, its significance and meaning and its fitment amongst other texts and performances of a specific culture.  The stories are categorized not by region, but by their theme so we have stories which are male-centered, women centered, about fate, death, gods and demons, humour, animals and stories about stories!

Many of the tales are familiar as we have heard them in our childhood, some in the form presented here and others with minor variations.  Each story captures the specificities of the region and the cultural idiosyncrasies, and thus on ‘migration’ every tale adapts to local peculiarities and morphs to assume different shapes and forms, while retaining its original structure. Therefore as is intrinsic to oral traditions, which tend to travel far and wide some stories here may also sound familiar to people residing in different parts of the world.

Akbar and Birbal, Tenali Rama, Hiraman parrot are familiar protagonists; the evil queen, the cunning sister, the penniless Brahman, the clever princess, the tortured daughter-in-law are characters around which many oral tales have been woven.  Here there are stories of victimization, chivalry, selfless service and other human/superhuman strengths and flaws as situations unfold to prove a point.  A ‘moral’ lesson is not mandatory at the end; often it is enough to outwit another.  Excessively violent at times, some of these tales can be read by children only with adult guidance and supervision.

Told in a simple colloquial language, these are stories describing a forgotten era which seem to be far removed from our present world. Gods, demons and ghosts have a form and animals talk and converse with humans, interestingly their actions are often as clever and silly as humans!

A delightful read in most parts, you will find the book entertaining on a lazy afternoon with a hot cup of coffee!  It describes India - the vastness, diversity, traditions and the myths, superstitions and folklore. A cultural cauldron that reminds you of an ancient time!


Let me know if you have read the book. What did you think of it?  Please mention it in the comments section below.

You can purchase the book here

Also Read,
26 Best Books: The A to Z Must Read Book List
Book Review: Between the Lines: Identity, Place, and Power