Eminent artist Yusuf Arakkal breathed his last on Oct 4, 2016 in Bangalore. The following article was published in Times of India as my tribute to him.

Even though Yusuf Arakkal was suffering from ill health in the past few years, the news of his demise came as a shock. He had become increasingly frail and reticent in the last few months, a pale shadow of his flamboyant and extroverted self. Arakkal’s last exhibition, held earlier this year, was on portraits of several artists - a project that he had been working on for many years. That was also perhaps his last social appearance. 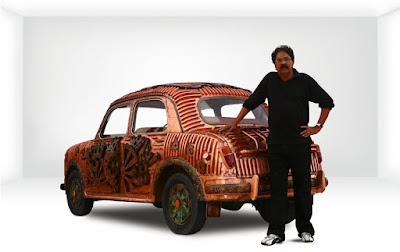 A significant name on the Indian and global art landscape, Arakkal had traversed miles in the course of his career. His haunting images with protagonists hovering haltingly in the depth of the shadows were dark and powerful. His tryst with harsh realities and chance encounters with the underprivileged and the oppressed created lifelong scars that continued to be translated on canvas. Yet, importantly, he painted not out of pity but in empathy, perhaps an effort to heal his own scars carried from years gone by. However, the sombre colours on his palette were in a sharp contrast to his own persona. Cheerful, stylish and a great conversationalist, Arakkal was vocal about his opinions and not afraid to go against the tide. He also wrote extensively for various newspapers and publications, raising concerns, sharing anecdotes and creating art awareness. 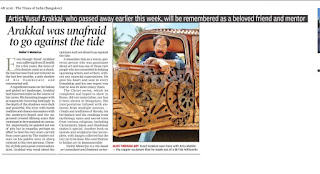 I remember him as a warm, generous person who was passionate about art and was one of those rare people who are committed to helping others - upcoming artists and writers, without any material expectations. He gave his heart and soul in every friendship and his one regret was that many a times he was let down by them.

The Christ series, which he had completed and hoped to show in Rome, could not materialise, nor has it been shown in Bangalore. His interpretation infused with elements from multiple sources - rituals and traditions of Kerala, his birthplace and his readings from mythology, epics and sacred texts from various religions, such as Christianity, Islam and Hinduism makes it special. Another book on murals and sculptures lies incomplete, with images collected but the text yet to be done.

His contribution to Indian art and the Bangalore art scene in particular is immeasurable. Rest in peace, for as Oscar Wilde said, “Death must be so beautiful. To lie in the soft brown earth, with the grasses waving above one’s head, and listen to silence. To have no yesterday, and no tomorrow. To forget time, to forget life, to be at peace.”