The Google doodle today, 11th Apr, 2017, celebrates the 130th birth anniversary of Jamini Roy, with an image inspired by his Black Horse painting 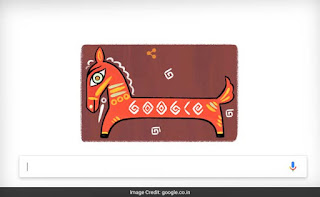 Jamini Roy (1887–1972) was a graduate from the Government College of Art, Kolkata, who gained recognition for his stylized paintings rooted in folk art traditions. The 1920s were remarkable for the search for identity on the creative front, and artists experimented with various subjects, themes, techniques and medium to express their artistic vision. Amidst this, Jamini Roy was drawn to the folk arts of Bengal, and simplified forms, while adopting bold, flat colours, and painted stories of ordinary men and women from villages, and other popular images inspired from the patua style.

“The appropriation of folk idioms manifested in various ways. There was a phase in which he adopted the calligraphic brush lines of Kalighat Patuas to create sophisticated forms. The austerity of lines only serves to highlight Roy’s superb control over brush. The lines drown lyrically and sometimes even sensuously with lampblack over white or pale gray background show not only vigour, but also the poetry latent in the human form. The paintings Baul and Woman Seated are excellent example of this style.” (1)

‘Ramayana’ considered to be his magnum opus is spread across 17 canvases and is created in the Kalighat pata style with natural colors, using earth, chalk powder and vegetable colors instead of dyes. The complete “Ramayana” is on display today at Sarada Charan Das' residence "Rossogolla Bhavan" in Kolkata along with 8 other large scale originals. The Das residence harbors the largest private collection of Jamini Roy paintings with 25 of the master’s originals. (2) Many of his other works can be viewed in the National Gallery of Modern Art in New Delhi.

Jamini Roy received many awards including the Padma Bhushan in 1955, he passed away in 1972.

Roy has played a huge role in popularizing Indian art among the masses and his works are recognised widely with ease. He is perhaps, one of the most copied Indian artists and for that reason, often it is difficult to assess the originality of his works.