(By Nalini S Malaviya)
Suhas and Suman Roy, the father and son duo present their recent collection of works – a colorful medley that is a visual treat. As they make a brief stopover in the city, we discuss their art and more.

Suman’s Christ is a figure of compassion, suffering and dignity – done on canvas and acrylic sheets the results are stunning. What is surprising is that Suman’s tryst with painting has been an intermittent affair, despite which his grip on different mediums is remarkable. Suman Roy returned to painting after a gap of several years. In the interim period cars, computers and books occupied his mind. Meanwhile, he saw the film ‘The Passion of the Christ’ which affected him so much that he interrupted his sojourn with a series of Christ figures. The violence and the bloodshed in the film moved him to translate them on canvas. The paintings on acrylic sheets (a difficult medium to work with) are particularly striking. 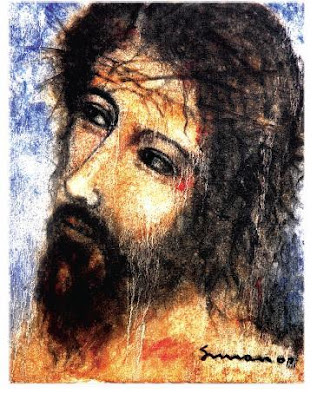 Comparisons between father and son are inevitable, but Suman is quick to point out that he has consciously avoided being influenced by Suhas Roy – the teacher. Suman’s early works were landscape paintings inspired by the serene surroundings at Shanthiniketan, followed by works on tribals. Then came a series on masks, a result of his extensive travels, and then finally the present works on Christ – a much in demand series. With barely contained excitement Suman announces that one of his paintings – a small one, as a matter of fact, has fetched 15 lakhs at a recently held auction, outdoing some of the senior artists. Suman Roy believes he has finally established his own identity.

On the other hand, Suhas Roy has been doing his ‘Radha’ series since 1979, which has been hugely popular. He is known for creating exquisite faces of women – romanticized portraits that are beautiful, sensuous and elegant. Conventional faces and forms acquire a rare quality in Suhas Roy’s hands, an air of fantasy or a dream-like quality permeates his works. In the present exhibition apart from the female faces in different mediums, there is a single painting of a man, a nawab holding a rose, which is rare from an artist known for his preoccupation with female subjects. 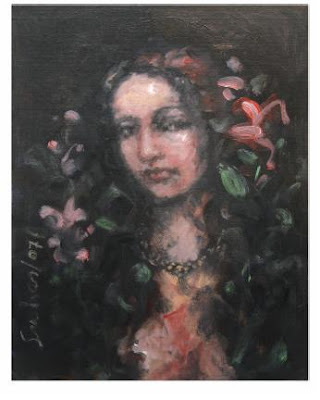 Suhas Roy’s skill with various mediums such as crayons, charcoal, and oil paints is equally legendary. He says beauty inspires him, whether it is a flower, a woman or a mountain… The other series he is working on now is The Midnight Rain, which comprises of large oils on canvas. The senior Roy believes in creating works that will last and be appreciated for generations. The art scene has changed a lot from his younger days, and he advises, “Art is changing, it is a digital era, but we should not forget our Indian roots. The soil determines how a person thinks or philosophizes and we should remember that.”

On the boom in the Indian art market, he remarks, “With so much hype surrounding the Indian art scene, the younger artists are not struggling anymore, times have changed and so have attitudes, but quality should be maintained.” This sounds like good advice, which should help in sustaining the buoyancy in the art market in the long run.

The exhibition is on till March 7 at The Hatworks Boulevard, Bangalore.