Bikash Poddar brings his recent watercolors that are pleasant and create an ethereal ambience. Romanticized landscapes in soft and appealing colors reflect the beauty of rural West Bengal. Swirls of colors blend seamlessly to heighten the effect of a dreamy sequence. There are a few figurative works also that are again done using the wash technique, and are characterized by minimal lines with an emphasis on aesthetics. Bikash Poddar, has worked as a commercial artist for many years, but then went back to painting a few years ago. He lives and works in Delhi.

This group show with twenty artists has some interesting works lined up. A majority of the artists are regulars at exhibitions in the city, and have their regular fare on offer. Beena Pradhan’s figurative work of a woman is eloquent, while MG Doddamani’s image is surreal and even a little chilling. Kinkar Ghosh’s woks on paper, especially ‘Savage’ are arresting. Nitin Nangare continues his series on Lambadi women and Sujata Achrekar with her ‘Brahmin’ series. Shashidhar Lohar’s ‘Tsunami’- a pen and ink drawing is full of details and attracts with its energy and restrained motion. M Senathipathi works are ornate and full of intricate detailing used as ornamentation. Somenath Maity’s has two paintings and both are equally striking, where towering structures (from his series ‘Structures’) in vivid colors make an impact. Sudipta Tewary has contributed a charcoal portrait that appears stylized. 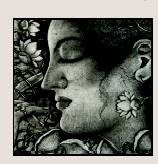