Last week saw Dinesh Vazirani, Director, Saffronart - an online auction house - giving a talk in Bangalore. He delivered a lecture on modern and contemporary Indian art before a select gathering of art collectors, gallery owners and art aficionados. What made the evening particularly interesting was that such interactions between the various members of the art community are rare in Bangalore.
The event, organised by Tangerine Art Space, was part of the opening of their art exhibition ‘Divergent Discourses’ that featured established artists such S G Vasudev, Yusuf Arakkal, Manu Parekh, Jogen Chowdhary, Krishen Khanna, Laxma Goud, Rameshwar Broota, Rini Dhumal, Surya Prakash and T Vaikuntam, amongst others. The single-day exhibition at the venue now continues online on their website. 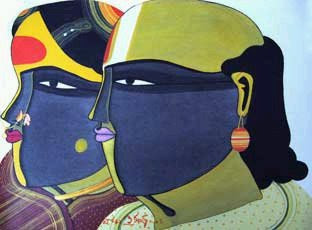 Dinesh Vazirani focused on the timelines of Indian art, how it has evolved over the years, and in particular, how the art market has grown exponentially over the years. He also touched on the various factors that impact pricing and the state of the market.
The contemporary art market has grown spectacularly in the last couple of years and Vazirani elaborated upon it with facts and figures. You will remember, last year, at the Christie’s auction of Asian contemporary art held in Hong Kong, Harsha’s painting ‘Mass Marriage’ went for a hammer price of HK$ 6.4 million, which was a record for any Indian contemporary artist. N S Harsha, who lives in Mysore, made one of his rare appearances and was present at the talk. He was given a much-deserved standing ovation. Harsha happens to be not only incredibly talented and extremely grounded, but also one of the most articulate (minus the sales pitch) artists I have met.
One must give credit to Leena Chethan the Founder Director of Tangerine Art Space for organising such an event. Incidentally, Leena drew a lot of flak for the first art show that she had organised a couple of years ago.

But, coming back to the present, an interactive forum such as this is vital in bringing together all players connected with the art field. It also leads to a healthy discussion, and creates a positive atmosphere for the city’s art lovers. Hopefully, such interactions will eventually also help in bringing more transparency (much needed) to the market.

Very interesting blog, Nalini. In fact, I have been collating a list of people who write on art. Is it ok to contact you with updates, etc.? Please do let me know.

Thanks and do send me updates.