We hear and read about successful artists only, but the truth is that for every Husain or Subodh Gupta there are many more artists who are struggling to find a foothold in the world of art. Many have been around for years while others have just begun their artistic trysts, but, on the flip side, there are those with average or mediocre talent who produce poor quality work and still expect to make it to the big league.
Anyway, in this week’s column, I’ve decided to draw attention to two young artists Tikendra Kumar Sahu and Sataban Sarkar who are participating for the very first time in a duo-exhibition. Their works may not be outstanding as of now but seem to have the potential to evolve and mature.

Sataban is studying for a master’s degree in print making at Nandan Kala Bhavan in Shantiniketan, while Tikendra has a bachelor’s degree in painting from Chhattisgarh and a master’s degree in Graphics from Bangalore University.
When I went to the gallery, I met Tikendra who was actively involved in the display of his paintings. He struck me as an intelligent and a very focused young artist who was quite clear about what he was painting and what he wanted to paint in the future. In this series Tikendra has combined relief work with painting on white paper. Using watercolours on embossed sheets, Tikendra internalises dogmas and ingrained values in an effort to question and rationalise them. He uses symbols to convey his thoughts, which sometimes are too literal and tend to focus on being decorative. 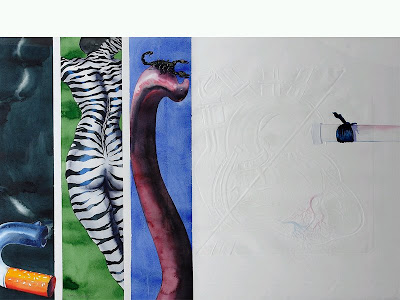 On the other hand, Sataban’s prints on rice paper and cloth are a combination of satire and wit as they comment upon political and social evils. The prints are produced skilfully and those on a single piece of cloth appear far better than a few paper ones. Undoubtedly, there is a raw quality evident in his works, but overall are quite interesting. 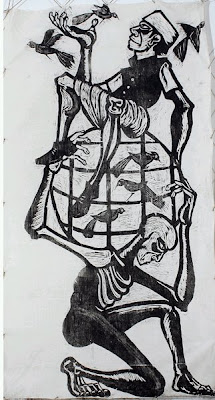 (The exhibition is on till May 2 at Right Lines Art Gallery).