Harsha does it again!

Not so long ago, in fact last year in November, NS Harsha created a record when his painting ‘Mass Marriage’ sold for a whopping HK$ 6.4 million at the Christie’s auction of Asian contemporary art held in Hong Kong. 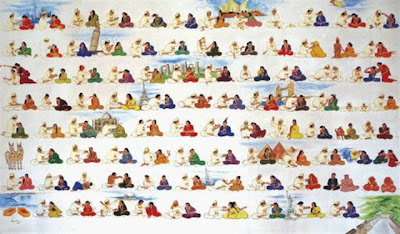 Last week Harsha was awarded UK’s prestigious 40,000 pound Artes Mundi Prize at the National Museum, Cardiff. The award was in recognition of his art that combines story telling with the miniature form of Indian art that he has adapted in a unique style. Harsha’s paintings bring out social and political incongruity with ease and wit. The minute figures form part of an intricate narrative that appears unremarkable on the surface but reveals layers of absurdities and satirical humour on closer scrutiny.
Harsha beat 8 other nominees to win the prize that is considered to be one of the largest international art awards.
Harsha studied painting at the Faculty of Fine Arts, MS University Baroda in 1995. He lives and works in Mysore, Karnataka.

To read an earlier interview with NS Harsha click here (you may have to scroll down quite a bit).