A set of black pickle jars, a pregnant lady along with a potted plant, and an ominous cloud suspended in a dark room appear theatrical and carefully staged to form a set of installations that have been cast with paper pulp and charcoal.
Shanthamani’s preoccupation with fragmentation continues in this exhibition as well. Her last show of paintings dealt with issues arising out of the city’s rapid urbanization, the resultant identity crisis and associated socio-economic concerns. Here too, there is an emphasis on the disintegrating urban environment, ecological imbalances and man-made catastrophes waiting to happen. 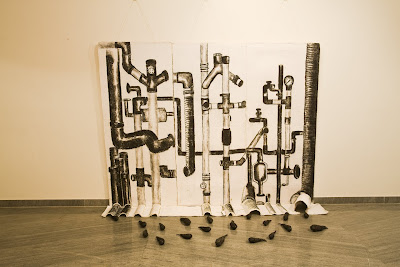 The set of four installations, Frozen Phoenix is a paradox, which force one to question whether the human resilience will rise above all odds or will it succumb to the effects of an altered environment. Being a woman artist, Shanthamani is able to bring a greater level of gender sensitivity in her works.
The black pieces of charcoal are a product of millions of years of ecological changes within the earth’s crust, and yet they annihilate in moments before turning to ashes. A symbol of ephemeral-ism, it causes one to reflect on the transience of the human race, and at the same time draws attention to the lingering impacts of irresponsible actions. 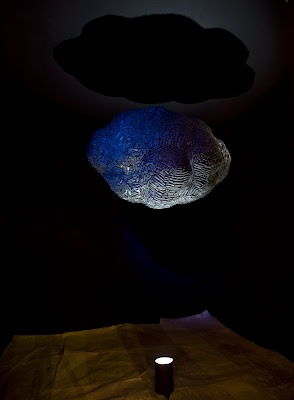 The use of charcoal as a metaphor works well in the sculptures and one is irrevocably drawn to the intense interpretations offered by the artist. The black cloud suspended in the dark space creates an eerie and somewhat surreal effect. The pregnant woman appears frail yet resilient as she stands next to the blackened potted plant.
This time Shanthamani’s works are powerful enough to succeed in unsettling the viewer. Part of a curated show, the installations will next move on to New Delhi.

The exhibition continues at Gallery Sumukha till 24th of August