Going by the number of exhibitions being held in the city it is hard to believe that the art market has slowed down at all! One reason that could explain the quantum of shows is that most of them must have been planned for and organised well in advance. But, what is interesting is that many of them also claim to be selling quite a few artworks.
Readers will remember that most auctions of Indian art as well as Western art have been performing miserably in the last few weeks. Many prominent art galleries too have indicated that their sales are affected. But, auctions reports alone cannot be used as a sole measure of the overall state of the art market. In fact, one notices that there is a section of people who is continuing to buy art for its intrinsic value. And, also, sale of affordable art is on the rise. Anything under a lakh or so is an attractive proposition for buyers. What is emerging is that buyers are much more aware now and they are able to distinguish, evaluate and compare quality with prices. This will hopefully result in better quality art at reasonable prices.

At one of the exhibitions that I visited last week, a large painting priced at Rs 90,000 or thereabouts was already sold. This particular work caught my attention with its subtle wit and humour. It features a cow wearing headphones and apparently snoozing, while listening to a crow seated on its hump and ‘crowing’ into a microphone. Part of a group show by four artists (Jiban Biswas, Mintu Malick, Ashis Mondal and Nageshwar Sharma) from Bengal, one saw pleasant works that focused mainly on aesthetics. This exhibition concludes today at Chitrakala Parishath. 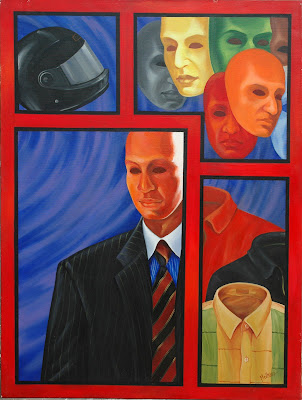 Incidentally, there were three other exhibitions going on at the Parishath - one of them was held by students from CAVA University, Mysore and featured their paintings and sculptures. The effect was a little crowded as there were too many works, but I quite liked a few works in stone and a couple of paintings. Hopefully, these students will do a better job of media and PR next time, because as far as I could see not many people knew about their show.
Another exhibition by a group of artists (Sumita Maity, Arpita Chandra, Pradip Sau and Anjan Kumar) from Bengal appeared to be slightly disjointed, but had a few good works.
The last exhibition that was going on was of watercolours inspired by nature, but it was a little too garish for me. I feel the beauty of the medium lies in its delicate, understated look which was completely missing. These three exhibitions that I have mentioned have already ended last week.