Last month I was in Ahmedabad and could not help but compare the art scene between the two cities. Quantitatively speaking, the number of galleries and art shows that happen in Bangalore is much higher than what one sees in Ahmedabad.
Visitors from Mumbai and Delhi find Bangalore lagging behind on the art front, and I have to say the same for Ahmedabad. The level of awareness and interest in art appears to be low and one of the reasons that I could correlate it with is that there is hardly any coverage about art related events in the media. And, this is despite the fact that a number of well known artists live there.
Media plays an important role in reporting news and creating awareness about local and global issues. But, it has an equally important role to play in providing the necessary leverage in promoting fine arts and culture. We are fortunate in Bangalore to have a supportive media who has been giving widespread coverage to art exhibitions and related topics. It is another matter that often the kind of art that gets promoted is questionable. While, in Ahmedabad, gallerists and other people that I talked to, cribbed about the dearth of art critics and journalists. 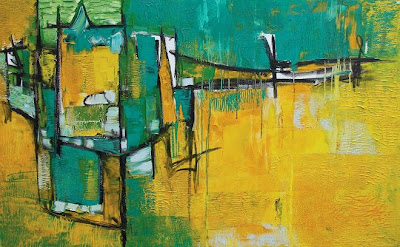 I must talk about one of the exhibitions that I visited at Marvel art gallery, a leading art space in Ahmedabad that centred around a contemporary theme along with an unusual execution. ‘Nagarnama II’ - Nationalism to Internationalism featured some humungous sized canvasses by a young artist Harshil Patel. More than the paintings themselves the two huge works running almost the entire length of the gallery, and the entire floor covered with charcoal bricks gave it an interesting dimension. Exploring the theme of rapid urbanization and the corresponding change in cultural identities, the paintings portrayed the altered skylines. This combined with an installation and a collage of photographs; the gallery space was radically altered and created a special ambience. The feeling one had of standing on the pitch black road and viewing colourful artworks around me was remarkable.

In closing I would like to mention that on November 8, the art auction house Emami Chisel will hold its next auction of Indian art. According to their press release, the focus will now be on contemporary works and a lot of young artist's works will be put up for auction this time. Apart from painting, drawing and printmaking there will also be sculpture, photography and a two Channel video projection. The online auction starts on November 3rd and will merge and continue with the live auction on 8th November.

Hi Nalini
Thanks for sharing, actually i have waited for this post, it was a simple excitment to know about ahmbd , yes i have mate marvel gallery at mumbai last expo, they have a quite strong collections of indian masters and also they are promoting young talents, but bit surprise by reading about their theme, rapid urbanization, it means in this globalization era, one will found almost same theme and concept , rapid urbanization, how development impact on social structure, environment, violence, peace, but one important thing i have noticed that style of art work image which you have added to it.
It is a happy feeling to see these abstract works after a while, seriously when you go through history, abstract came a long after realism, when artists reached that highest limit, camera came and to express in a different style abstract has created, it never means abstraction has no realtion with realism.
wishing you all way success

Themes are usually contemporary or relevant to today's times, but often the interpretation or the execution can make all the difference.

This work reminds me a lot of Somenath Maity's "Structure" series - he also deals with the metamorphosis of cityscapes. I guess it would be unfair to say that this artist was influenced by Maity since we know so little about his context...