So much to see

A Sculptural Lineage
A sculpture show by Chennai based artist V.R Raviram previewed last week and presents his recent series titled A Sculptural Lineage. A majority of his works resonate with folk art elements and traces of Cholamandal style. The sculptures appear to be heavily influenced by renowned sculptors P.V.Janikiram (his uncle) and also S Nandagopal, but probably this has more to do with the Cholamandal aesthetics that experimented with frontal sculpture and elaborate embellishment on the metal surface. 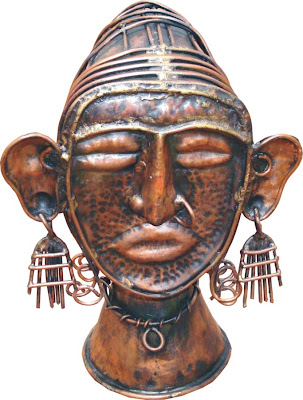 Traditional motifs, mythological figures, animals and birds form the themes in copper. There is a small set of works that are radically different from the conventional decorative mode and are meant to be more contemporary. A simple and minimal approach has been adopted here. It could not have been easy for Raviram to break away completely from his old style that he has perfected over the years. One looks forward to his new works and see how he balances the two diametrical opposite styles and sensibilities.

(The exhibition continues till March 25 at Gallery Mementos, Bangalore – 1)

Myth and movement
The other exhibition Myth and movement is a thematic show that exhibits the recent works of four artists Seema Kohli, Ramesh Gorjala, Atul Talukdar and Dimpy Menon and explores “ideas of myths and cosmic energies and movements of forms in space”.
Seema, a self taught artist indulges in a quest for the spiritual and self. Her elaborately executed canvasses are rich in details with every inch of the canvas covered meticulously. Repeated patterns and motifs add an element of design while gold leaf embellishment gives it an exotic look. Ramesh presents traditional myths and folk arts with a contemporary touch. Kalamkari motifs form the backdrop in most of his works. 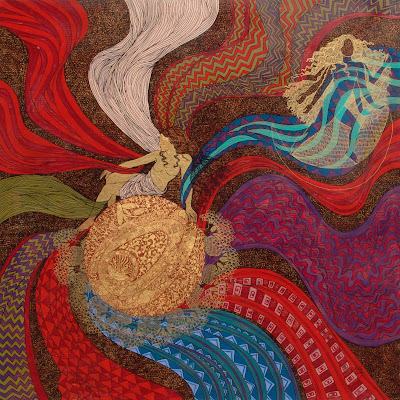 Dimpy’s sculptures are minimalistic in their approach, and lyrical and graceful in their form with emphasis on the finished surface. Atul, an artist from Bangladesh also presents bronze sculptures of human figures such as musicians and dancers. There is a distinct earthy appeal to his works.

(The exhibition continues till March 31 at Mahua Art Gallery, Bangalore – 80.)

For a good cause
Incidentally, another art exhibition A Wonderful World, a benefit for the New Delhi-based NGO Four Steps (a research, training and rehabilitation centre for Children with special needs) will be held in Bangalore. Works by artists such as Jamil Naqsh, Amiya Bhattacharjee, Kamar Alam and Seema Kohli amongst others will be part of the show to be held between March 18th - 20th, 2009 at Olive Beach.

BRAVO!! How beautiful and superb bronze sculpture he is. If I were a milliionaire, I'd send them each a copy of the issue. It's really quite extraordinary.

He is my close friend of mine. He was my classmate in the Clarke Kent of the School of the Deaf and Mental Retarded, Chennai. He always said about late Uncle P.V. Janikiram. He tried to follow his footsteps. I surprised that he did it. I knoew he have majority of his works resonate with folk art elements and traces of Cholamandal style. I do not know what to say about the sculptures appears to be heavily influenced on the metal surface.