Four of a kind

(By Nalini S Malaviya)
At the recently held art summit several works of art competed with one another to catch the visitor’s eye. Anish Kapoor’s installations were of course the biggest draw at the fair. Then, names such as Ravinder Reddy whose iconic Head in a brilliant red and Subodh Gupta, whose large scale installation made out of utensils created an impact right at the entrance. While, Nataraj Sharma’s humongous installation made out of metallic wire and tiny airplanes and Manjunath Kamath’s digital montage were outstanding. Apart from these well known names there were several others that were truly brilliant and that stood out either because of the thought process behind them, or they were just so spectacular that they could not be ignored. Although there were many that grabbed my attention, I have listed four of these below.

Sandata ni Lila by Lirio Salvador
A sculptural assemblage by an artist from Philippines is essentially a guitar made out of scrap that stood against the wall at The Drawing Room, a contemporary art gallery based in Philippines. The stringed instrument was made out of gears, mixing bowls, utensils and door handles, and the interesting part of this assemblage was that visitors were encouraged to pluck at the strings. The musical instrument was a creative fusion of art and music. 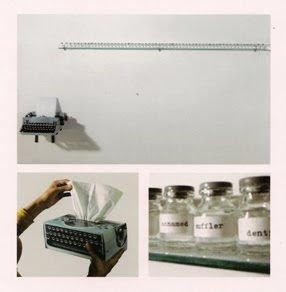 One Thousand Tears by Suchitra Gahlot
This installation comprised of a thousand 10 ml bottles containing artificial tears and a typewriter. Based on the replies that one thousand people gave to the question “Why did you cry last?” the vials were labeled. This installation caught my attention with its simplicity and poignancy. 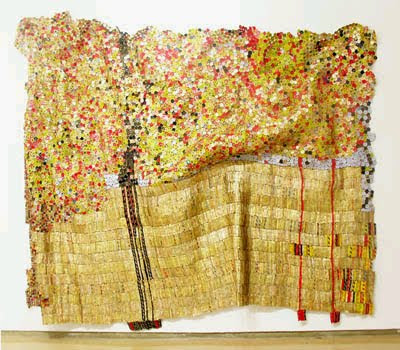 Black River by El Anatsui
A massive installation on the wall spanning approximately 8 feet by 12 feet made out of aluminum bottle caps and copper wire was displayed at the Sakshi Gallery. This stunning piece of work could not be ignored by any stretch of imagination. 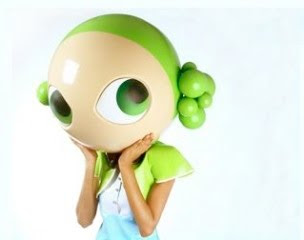 Supercalifragilisticexpialidocious by Princess Pea
At the Rob Dean Art – a U.K. based gallery one encountered a fun and quirky series of photographs and installations that used a cartoon character to create the artworks. The stall was buzzing with activity with the artist wearing a ‘cartoon head’ while posing with the visitors, and offering everyone cupcakes. Although, the theme of the project was based on the angst that the artist faced in her growing up years as she was very thin, and was always reminded that her head was too big for her body. However, the treatment was fun and made literal use of cartoon figures. This one caught ones attention with its sense of humor, and the novelty of execution.