Raja Ravi Varma’s Oleographs: Glimpses from the Past

An exhibition of rare oleographs by Raja Ravi Varma opens tomorrow (Oct 16) in Bangalore. Titled Emotions; Relations; Reflections, these select oleographs from the Ravi Varma Press belong to the private collection of Sachin Kaluskar from Vadodara.

The exhibition has also been curated by Sachin who has adopted a thematic approach in categorising them. Sachin started collecting oleographs purely by chance when a print of ‘Saraswati’ turned out to bear a mark from the Ravi Varma press. His curiosity piqued, Sachin researched on Ravi Varma’s oleographs and was fascinated by what he read. He then went on to collect these prints from friends, royal families in Saurashtra and even temples. He has now been collecting oleographs for the last eight years and has amassed a large collection, parts of which he has exhibited in various places.

According to Sachin, Ravi Varma’s paintings depict multiple emotions such as devotion, love, pain, anguish, innocence and power, amongst others. This exhibition of oleographs too portrays gods and goddesses in a human form, and are depicted experiencing myriad emotions - in effect every oleograph has a unique story to narrate. 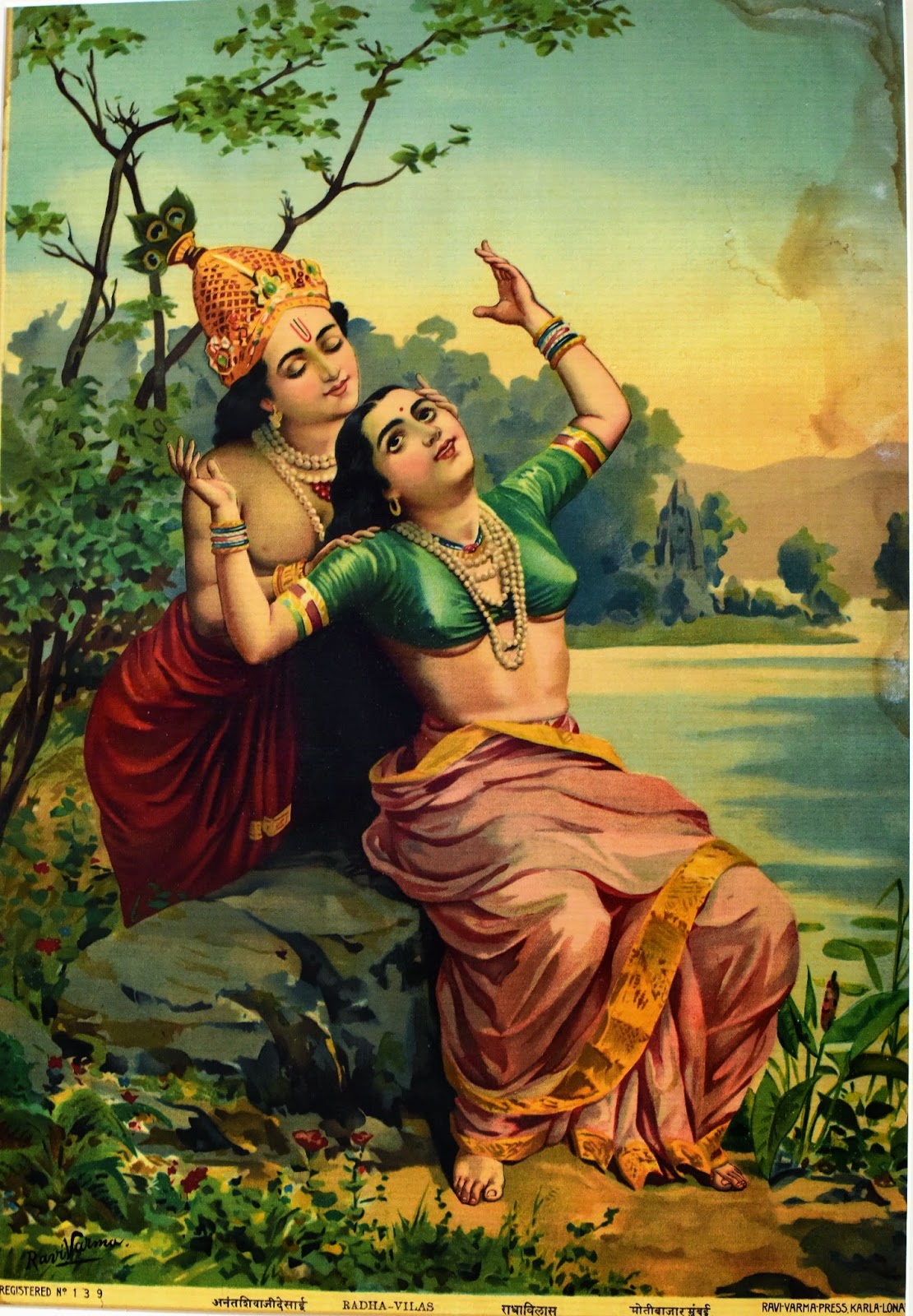 Ravi Varma (1848 –1906) born in Kilimanoor, present day Kerala was a prolific painter who depicted scenes from the epics and mythology, and also painted portraits of royal families. He was the first Indian artist to depict cultural themes through European painting techniques and was also one of the first artists to use oil as a medium of painting. His paintings of gods and goddesses and vignettes from mythological tales are well recognized and reproduced even today.

Ravi Varma’s oleographs also called chromolithographs were instrumental in taking art to the masses. Oleography (oleo means oil) in essence is a process of reproducing an oil painting on paper to match the exact colours and brushstrokes with the objective of making it look like an oil painting. The technique was pioneered in the 1830s by an Englishman George Boxter but came into wide commercial use only in the 1860s. Oleography was the most popular method of colour reproduction until the end of the 19th century, when more efficient techniques rendered it obsolete.

It is believed that Ravi Varma started the lithographic printing press on the advice of Dewan Madav Rao in Mumbai in 1894 and it was managed by his brother, Raja Varma. The printing press was procured from Germany and the technicians to operate the press were also from Europe. The oleographs were mostly of Hindu dieties and depict scenes from the Mahabharata, Ramayana and the Puranas. The oleographs were very popular and continued to be printed even after Ravi Varma's death in 1906*.

136 oleographs will be presented in this exhibition and a few of them show the effects of ageing on them, which is no surprise given that they are almost 100 years old. Damyanti, Maneka and Vishvamitra, Nal Damyanti Vanvas and Radha Vilas are some of the prints which will be on display here.


If you enjoyed reading this article, do share it using the social media widgets at the top and subscribe to receive regular updates from Art Scene India