Bharat Thakur's art is an extension of his philosophy towards life and living, and simultaneously, it is an exploration of the self and the spiritual. Although non-figurative, the paintings hint at observed narratives and personal vignettes. In the current exhibition, The Space Between, the entire body of works are abstracts which have evolved significantly in the last couple of decades. And they have become more textural, layered, and non-representational.

There is a greater fluidity in the application of the paint and an increase in depth as well, which has brought about a rhythmic and lyrical quality to it. The overall composition has an intrinsic harmony, which is highly evident in many of the works on display, where the use of light as a divine and serene element gives it a mystic and tranquil touch. At the same time, the combination of colours and rapid strokes suggest an almost effervescent energy which appears to be spilling out from the canvas.The black and white series has a mysterious quality to it. 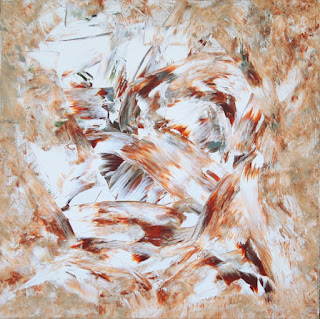 There is some restraint that Thakur now depicts in his recent works, which helps to take it to another level. A prolific painter, the immediacy of the medium in acrylic and the process of painting - applying paint with his hands lend a tactile quality to the canvas. A compulsion to paint for several hours on a daily basis, the practice is in fact meditative for him – an extension of his yoga practice.

Leonardo da Vinci said that "Painting is poetry that is seen rather than felt, and poetry is painting that is felt rather than seen."And here, in the gallery, every work of Thakur is accompanied by a verse written by him - an evocative expression that draws the viewer in to explore both text and image.

The exhibition continues till 22nd Dec at Time and Space Art Gallery, Bangalore.
By Nalini Malaviya