Bangalore: MAY 2017 Screening of Films at NGMA

Journeying through life & relationships in
the passage of time

MAY 2017 screening of films

In the month of May we return to a series of films by auteur directors like Akira Kurosowa, Andrei Tarkovsky, Jim Jarmusch, David Lynch and Asghar Farhadi. These seminal films are philosophical deliberations on living and dying, journeys made through life, relationships formed and the passing of time.

Akira Kurosawa’s 1952 film Ikiru (can be translated ‘to Live’) deals with a dying man and his final desperate quest for meaning. In Stalker, Andrei Tarkovsky (1979) explores existential desires and meaning. What makes life worth living? What is reality, and how does one define it? Even today we are unraveling the layers of a complex cinematic experience like Stalker but Tarkovsky often insisted that his films held no coded messages, rather they were visual poetry which strove to convey emotion rather than meaning. David Lynch’s The Straight Story from 1999 is a classic American Road Movie, based on a true story of Alvin Straight’s 240 mile journey on a lawn mower to meet his estranged invalid brother.  The film is a beautiful, understated search for self and examination of mortality. Jim Jarmusch’s Broken Flowers (2005) is a comedy-drama film that explores the alienation and desperation that comes as a result of not making any choices in an absurd existence. The movie stars Bill Murray as a man on a road trip, searching for the mother of a son he may have fathered. And finally a 2009 film by Asghar Farhadi titled About Elly, a curious psychological drama through a fascinating interplay of personal and social relationships amongst a group of middle class Iranian friends on a vacation. 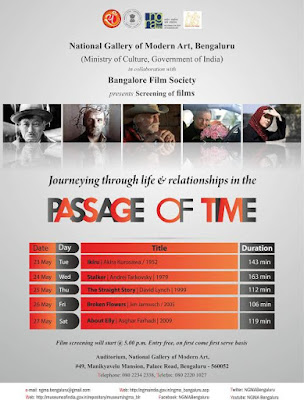