Artist K M Madhusudhanan’s solo show in Dubai is currently on at 1x1 Gallery, and it has melancholy and a sense of foreboding, as it explores the undercurrents of violence in today's times, writes Deepa Gopal

K M Madhusudhanan’s was part of The Radical Movement, an avant-garde movement of the 80s, which has gradually acquired a disparate meaning than that it had at the time of its inception. It was formed as a student body that wanted to be united to fight against the injustice and aberrations of the system at the time. They had just finished their studies and it was a significant phase for them, and friendship was an important unifying factor; to stay united for a cause and they unwaveringly discussed contemporary art. The social aspect of such a group, at any point of time, has a strong rooting. Art is meant to be social and should influence the mass all the same. It resonated with the philosophy of The Third Cinema, an aesthetic and political cinematic movement in the Third World countries of the 60s and 70s and the ideas propounded by its makers like Fernando Solanas that decried capitalism and neo-colonialism and emphasized on topics like national identity, poverty, tyranny and revolution, class and cultural practices.


As you enter the spacious and aptly lit 1x1 gallery the air becomes grave, all you can but see are the dark frames oozing with the history of a colonial past interspersed with the current times threatening violence and abuse of power which is still current as it was a century ago.

A multi-faceted artist proficient in various mediums that seem to flow seamlessly into one another be it art, cinema that includes video art and feature film Madhusudhanan’s works are brilliant particularly for the colour scheme that strikes you - a mix of sombre charcoal works and dark tones with a touch of white, red and some light and fire. It has melancholy attached to it and a sense of foreboding, at the cusp of revelation. It does have the Hopperian feel of ‘something just happened or something is about to happen’ particularly in his newer series. 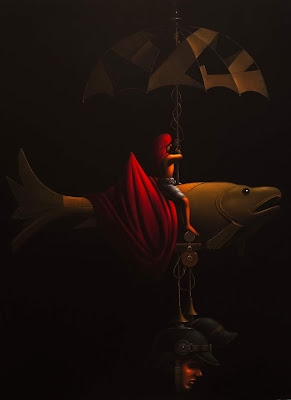 The Gandhi series (2019) are 10 in total; Gandhi looks despondent and immersed in his own world, often his head substituted for a globe, a lantern, a clock while in some other works his limbs are substituted with a goat, books, weapons etc. They are loaded with symbolism as with his other works and we are meant to put the pieces together as we gradually move from one to another. One can see the recurrence of lighted bulbs similar to the presence of an almost invisible thread/wire that perhaps has a chance to manipulate to what it’s attached to. Refugees series from this year stands out the most.

Gandhi becomes a prominent subject in our times not only in India but globally due to several factors especially the prevalence of violence in our daily lives across media. From religious tugs, caste and creed, to amassing power and wealth; Gandhi remains the searing and indulgent spot and that’s what makes Gandhi a forever subject.

Madhusudhanan’s art is just not for the senses alone, it’s for the intellect as well. The artist is crystal clear when he says that everything we do is political whether it be in our home or in out street. Everything resonates to it and we can’t push it to the back drop.

Red Street, Arrival and Penal colony (2017) will unsettle you. Most of his works are multi-panelled where every section is a story on its own. Penal Colony though reminds us of Kafka’s title it’s a historical probe into the heart-wrenching tragedy, the ‘Wagon Tragedy’ that happened during the British rule in 1921 at Northern Malabar. It’s a reminder of the tortured death just like Colonization which was in itself a torture and a sport. The Archaeology of Cinema is placed diagonally opposite to where his movie History is a Silent Film (2008) plays. It reminded of lives that remained stuck in the mute net of forgetting. It was awarded the Outstanding Short Films from International Festivals, The Museum of Modern Art, New York in 2007. It was at this point that I noticed the artist enter the gallery in his black dress and I thought that he might as well have descended from one of his displayed paintings. People flocked around him to converse and discuss. 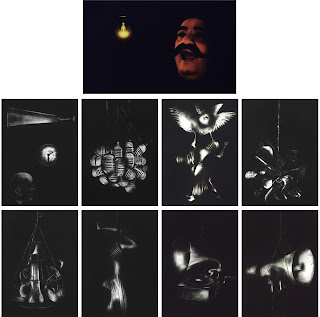 One of the participants of 2014 Kochi Muziris Biennale, Whorled Explorations where he displayed The Logic of Disappearance - A Marx Archive, one can see a similar strain of works in charcoal in 1x1 gallery as well. If it was 90 frames in the nostalgia-seeping walls of the Aspinwall, it was 8 frames here along with an oil painted Ustad Bade Gulam Ali Khan at the pinnacle in Homage to Ustad Bade Gulam Ali Khan 2. One could not help but notice the microphones, gramophone and megaphone invoking the sound as the Ustad himself is in the mid-way of his gayaki not to forget that he himself had borne the brunt of Partition.

Deepa Gopal is an artist and author of the art blog, HuesnShades, an award-winning blog, she currently resides in Dubai.