Review: Mapping Places and the Self 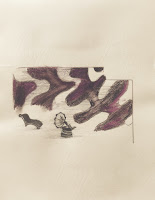 Neha Chandaria’s ongoing series comprises minimalist works on paper with markings and calligraphic text. Furniture and other functional household objects are rendered as a letter/text, filling the motif with the grey of the pencil on notebooks and writing sheets. The intimate drawings on personal writing materials are akin to journaling, perhaps a process of reconciliation with various transitions occurring at multiple levels in her personal life. Her recent relocation to UK from India, with its inherent geographical, social and cultural changes involved in the process, amidst notions of identity and displacement, contribute to the subtext in the journaling. There is an evident mapping of the associated anxieties to locate one self and the landscape in and through the art making. The unoccupied chair in its diverse forms is a repeated motif, deployed symbolically, its spatial display leading to several interpretations. 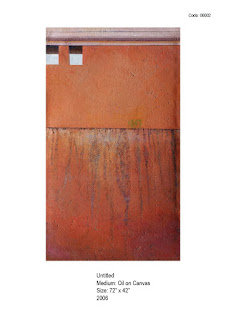 Chandaria completed her Masters in Fine Arts from Faculty of Fine Arts, M.S. University, Baroda and went on to teach at Sir J.J. School of Arts, Mumbai and worked as a product designer before relocating to London. Her early works, while living in Baroda, were oil on canvas, in a large format, depicting architectural elements as sliced off sections in warm tones, experimenting with light as a spatial theme. Symmetrical patterns predominated, with minimal motifs, the layers and textures built up to depict sections of dwellings, and the warmth and sensitivity alluding to human presence. The paintings appear to be anchored in realism; the absence of sentient life palpable in suggestions of another world or existence beyond the walls, doors and niches. The structured enclosures formed a metaphorical ground for stories that lay outside its periphery. Another series from this time period, done with gouache on paper in a small format, layered and textured with the occasional motif, appears to lay the foundation for her later works. 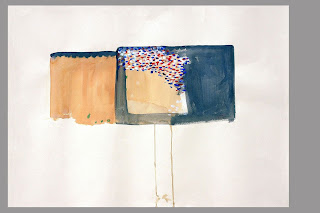 After shifting to Mumbai, a large bustling city known for its tiny living quarters seemed to impact Neha’s art making in numerous ways. She gravitated towards a minimalist palette and small works on paper. There is a visible anxiety apparent in the works, fragmented, ragged edges and short rapid brushstrokes – perhaps a reflection of the pace of the metropolis. On a short trip to Scotland in 2010, the travel to Honister slate mine had an enormous influence on her palette. She found the colour grey of the stone – slate, resonated with her on psychological and philosophical planes. She could relate to the metamorphic layering of the stone, its distinctiveness, the imperfection, the texture and its unique colour. It also appeared to reflect her state of mind, the in-between zone linking physical places and her art practice. The subsequent works created around this concept were exhibited as a solo show titled ‘Grey’, at Gallery Knots, Baroda. 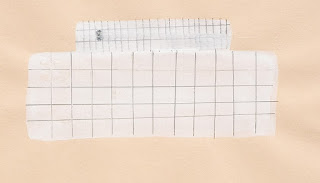 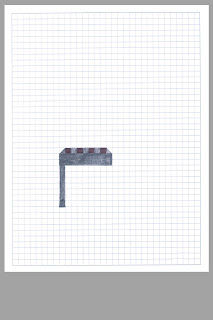 In a marked shift, Neha was then drawn to further strip away unnecessary elements from her works. It became increasingly minimal, characterized by markings with pencil, exploring interplay of lines, geometry and grids. The markings highlighted the essentials and attempted to negotiate the need for compositional space and art materials. These works were sparse and pared to a bare minimum, which she explains as a conscious decision to strip the excessive layering, while evaluating the kind of medium she wanted to work with. She says, “I believe in these set of works, I am celebrating my penchant towards mark making, pencil became my favourite medium, and this minimalism somehow is influenced by my interest in philosophy of Aparigraha (desire for possessions to what is necessary or important).”
Chandaria’s works are at an interesting juncture, an additional distancing from motifs and visual associations could imply a prominent shift towards minimalism, whereas retaining pictorial metaphors will augment the personal narrative.

Chandaria is currently working as a community art practitioner and a freelance artist in London.
All images courtesy the artist