(By Nalini S Malaviya)
Ravikumar Kashi’s new works titled ‘Any Moment Now’ highlight the role of media advertisements in building up expectations, which subsequently breeds desire. The media focuses on creating and increasing dissatisfaction by continuously bombarding the viewer with something better and greater. The advertisements encourage people to spend more money in order to feel better. It is this aspect, which finds place in Ravi’s paintings. In his last show the artist had explored urban complexities and conflicts arising out of media hype. While, these present works are an extension in a sense, they also explore the idea of proximity of images (Sannidhi – the art of proximity), which in turn generate a meaning. For instance, any change in proportion or presence of text results in a change in the entire meaning of the composition. According to Ravi, “I am interested in how these images loose some of their original identity, get altered and gain new meanings when combined with other images and text.” He therefore uses Photoshop as a tool to experiment.

The artist continues his tryst with mediatic imagery, but this series brings out the sense of anticipation, expectation and unfulfilled desires, in today’s fast paced world. The protagonist as if suspended in time, awaits the next moment where an extraordinary future is round the corner. He hopes and waits to experience intense pleasure or maybe even a divine intervention. It also reflects the psychology of the human mind that is ever optimistic and always hopeful for a brighter tomorrow. And, this is what the media exploits and utilizes to the hilt, when selling a product. Ravi believes the media by itself has become an entire secondary reality by all these promotions, and has acquired an independent existence, which cannot be ignored.

The artist has borrowed symbols commonly seen on the computer screen, such as the cursor, sand timer, and hyperlinks to emphasize how deeply these icons are rooted in our consciousness at the moment, and to create the illusion that the painting itself is part of the electronic medium.
The title work, a triptych focuses on the theme of the series, where the central panel depicts a man running, while the two side panels are filled with splashes of color. The imagery hopes to convey the feeling of escaping from reality or running towards one’s goal. It plays upon the aspirational value, which causes such contradictions. The five stars on the top part of the canvas could signify a rating for a movie. ‘Wait a minute’ shows a closed door and a man sitting on an inflated balloon. The sense of waiting, underlying tension and anticipation comes through. ‘Wish’, a distorted and magnified image reflected on the petrol tank of a gleaming new red bike reiterates the desire for all material things - more expensive and more powerful whether it is automobiles or bikes. ‘Pinnacle’ a panel divided into two has a stepladder going up, where the top part of the canvas has a burst of colors, which symbolizes intense pleasure and once again draws attention to power games and the pursuit for happiness. 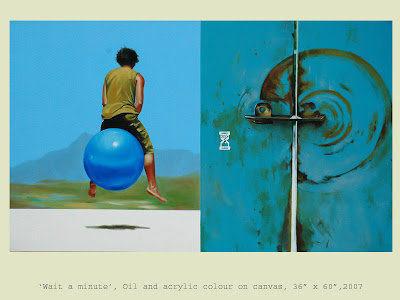 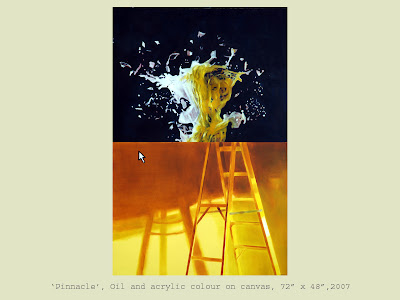 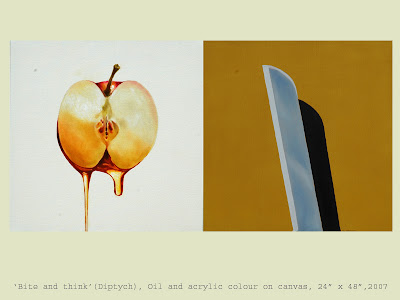 In his compositions Ravi Kashi juxtaposes sometimes disparate images that complement to generate a new meaning or openly conflict to present a dichotomy. However, the latter works out well whereas, when the images are semi-coordinated the result is somewhat more straightforward and almost predictable. On the other hand, the conflicting images tend to engage the viewer to analyze and interpret the composition. There are a few paper cast works also in a diary like format where visuals and text are used to convey he narrative.

The series will be exhibited from 27 May – 2 June 2007, Air Gallery, London.
By Nalini Malaviya