A world of fantasy - Gurusiddappa GE

Bangalore based artist Gurusiddappa GE held a special preview of his recent works in the city. Titled ‘The first rain after a long summer’ this particular series will be exhibited later in Mumbai. A world of fantasy is created where ordinary people - men, women and children are transported into the realms of an imaginary zone. There are only 14 canvases on display, but Gurusiddappa’s predilection with larger than life images continues, and therefore his paintings dominate through sheer size and fantastic imagery. Technically Gurusiddappa is extraordinarily competent and his skill is remarkably demonstrated in these works as well. 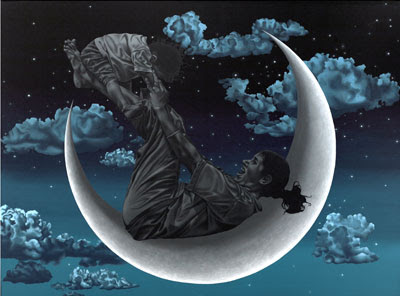 Gurusiddappa won the National Award from the Lalitkala Academy, New Delhi in 2004. He completed his BFA in Painting from Karnataka Chitrakala Parishat and then went on to do his MFA from MS University, Baroda. Gurusiddappa belongs to Chitradurga district in Karnataka and traces of his early days of childhood are evident in this particular series. The star lit sky, magical moments found in everyday elements, and ordinary people who dominate the canvas. Not to forget the children who caress the moon and ride mythical creatures against a backdrop of a glittering sky. What stands out is that there is a sense of theatrics and drama in his paintings. When you look at the dark sky with a million stars, or the moon held in the palm of a child as he flies across the sky riding a fabled creature, a delicious sense of nostalgia and warmth pervades. The canvases with children - presented in various forms – playful, innocent, curious and mischievous invoke a naïve appeal. In most of these works there are surreal elements that have been cleverly infused along with other elements of fantasy, which only add to their visual charm. This seems to work well in most of the paintings, except a few. Gurusiddappa has drawn from his own experiences; for instance he worked earlier with street children and this has helped him to relate to their perspective and present it effectively. In one of the works, a couple of children look on while a pair of street dogs sway on a swing.
The other strong influence that is evident is his theatre experience - as an actor and a set designer – in the larger than life imagery and the arresting backdrops. According to Gurusiddappa literature and poetry in particular has also given shape to his art. This series is in many ways like the stanzas of a poem - each verse unfolds with a new canvas. However, some of the works appear repetitive, where the content remain the same and there are only slight variations, which makes them somewhat monotonous for the viewer. For instance, in a painting that could be autobiographical, Gurusiddappa balances his daughter on his legs, while resting against a delightful crescent moon. In the next painting the image is repeated with a woman holding the child on her lap.

The first rain after a long summerOctober 30 – November 2, 2007
Gallery Sumukha, Bangalore
The exhibition then moves to Mumbai from November 30 to December 17 at Sakshi Gallery.
(Initially published on mattersofart.com, but now the site seems to have closed down, so here's the review - NM )
By Nalini Malaviya No comments: