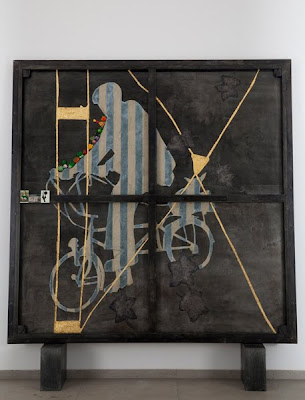 Artist Atul Dodiya’s talk will be about the diverse influences, references and quotations in his work; why he chooses a specific genre; shifts and change in the media that he uses, and the ways in which he addresses the political, social and personal traumas within his painterly practice.

About the speaker : Atul Dodiya

Atul Dodiya (b. 1959 ) studied at the Sir J J School of Art, Mumbai and the Ecole des Beaux-Arts, Paris.

Dodiya’s allegorical paintings on canvas, paper and metal shutters draw on diverse traditions in painting and text. He works with unusual materials and techniques and brings to the viewer a palimpsest of images and a collage of experiences. Dodiya’s art is marked by kaleidoscopic quotation and his pictorial narratives are taken from iconic images from global visual culture- cinema stills, cartoon strips, popular oleographs, the homegrown version of MAD comics-all intertwined with autobiography. His intricate and multi-layered pictures work like a jigsaw of ideas that have been put together with humour and irony.

Atul Dodiya has had 25 solo shows in India and abroad, and this includes a mid-career retrospective at Japan Foundation Asia Centre, Tokyo in 2001 and a solo show in Reina Sofia Museum, Madrid in 2002. Dodiya participated in the 1st Yokohoma Triennale, 51st Venice Biennale, Documenta 12, 7th Gwangju Biennale & the 3rd Moscow Biennale. Dodiya lives and works in Bombay, India

About the lecture series : Practices in Contemporary Art & Architecture

Practices in Contemporary Art & Architecture Lecture Series has been initiated by CoLab Art & Architecture, Goethe-Institut/Max Mueller Bhavan, Bangalore in collaboration with the Venkatappa Art Gallery, Bangalore. Spread over a year with one lecture a month, the visual art series focuses on practitioners who look at both ‘reconstruction’ and the ‘historical turn’ from the perspective of contemporary artistic practice: the revisions and re-readings that take place when images, works or events from the past circulate in a changing set of configurations ; the lectures on architecture will attempt to look at the radical shift in the imagining of the public space and the notion of spatial equity, and the questions thus raised.

I met Atul Dodiya when he was in Bangalore for the opening of his exhibition. I wrote the following article for the Sunday Times of India, Bangalore. Since, Dodiya is doing well internationally I thought of sharing the write-up. 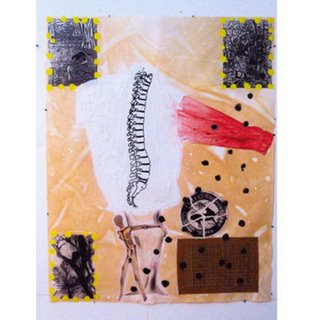 Titled ‘The wet sleeves of my paper robe (Sabari in her youth: after Nandalal Bose)’, the mixed media works with paper pulp, and print are the outcome of a workshop held in Singapore recently. Inspired by a series that artist Nandalal Bose did on Sabari in the year 1941, Dodiya re-narrates Sabari’s tale. Guided by American artist and paper-maker Richard Hungerford and Japanese master print-maker Eitaro Ogawa, Dodiya came up with the present series. Drawn from the epic Ramayana, the protagonist is Sabari the tribal woman who offered berries to Lord Rama after tasting them. His Sabari is presented in the contemporary context where scatted bones and red-stained shirts describe the epic war as much as they comment on the violence in recent times.

White cotton shirts, synthetic hair and paper-cast flowers are embedded in pulp while some flowers are also covered by gold leaf. Cultural theorist and curator Ranjit Hoskote writes, “ Sabari is given her freedom in this imaginative re-rendering. The archetype of a life premised on anticipation, a figure lost at the edges of the triumphal march of the Lord, she becomes the epicenter of Dodiya’s seismic recasting of the epic. In Dodiya’s account, she talks to the red birds of the forest that is both in her mind and around her; she grows more heads than the one filled with beatific visions of the Divine. She shakes a rain of fruits from a tree as austere as Mondrian; she dances across a river of bones, visits the battlefields of the future where skeletons have formed into large subterranean assemblies.”

Dodiya began his artistic career painting in a photo-realistic manner, however with time his paintings became more contemporary in nature. He feels an artist’s work should provoke and not aim to please. He enjoys working with different cultural contexts and presenting local subjects in a global style.

He firmly believes that every artist has a social responsibility. One cannot paint in an ivory tower. While twenty years ago there was more freedom and viewers were more positive and acceptance was greater. While now, often political parties and ideology plays a role.

How easy it is for a common man to understand art? “Even artists cannot understand modern art at times, let alone the common man. However, those related to art for instance, regular visitors to art exhibitions will find it easier,” explains Dodiya. “But everyone irrespective of their art initiation will have a response – a strong like or dislike!”
By Nalini Malaviya No comments: