Bose Krishnamachari, an artist, curator and a recently turned gallery owner, wears many hats with panache, and is now in the news for his solo exhibition that is currently on at 1x 1 Art Gallery, in Dubai. The title of the exhibition NO is unequivocal and emphatic, in characteristic style. Interestingly, in his curated shows too, the titles are clear and uncluttered. Based in Mumbai, Bose is a familiar and critically acclaimed name in contemporary art.
Amongst his notable shows that come immediately to one’s mind is LaVA, (laboratory of visual arts), an installation, which was exhibited in Bangalore about four years ago at Gallery Sumukha. LaVA is essentially a mobile library that contains books, DVDs and CDs on a range of visual art practices such as cinema, architecture, design, fashion, cultural studies and philosophy, along with some of his collection of art objects. The archival project relooks at dated systems of disseminating information and knowledge and aims to redefine access.

NO
It is part of our vocabulary incessantly and has a powerful connotation, but how we choose to interpret it can make all the difference. According to Bose, “In Indian agnostic philosophy there is a constant denial of the apparent to reach out to the implied truth… The notion of ‘NO’ played up here therefore becomes a juncture of negotiation with the reality.” And, thus the artist elects to convert the negative monosyllable into a tool for positive change, and has expanded the concept to encompass wider issues of war, politics and identity in the artworks. 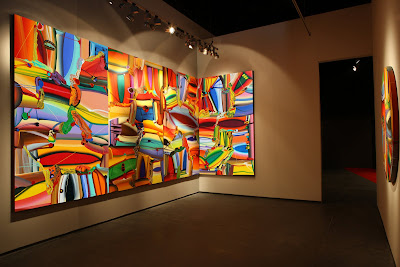 The exhibition features Stretched Bodies installations, a shelf Roots + Map = Mondrianity, White Ghost and the Red Carpet, No + No = Yes, Minus + Minus = Plus, Long Live! (Andy Warhol), Long Live! (Gandhi)and a few other works with equally intriguing titles. Following his maxim of going ‘maximum’, the Stretched Bodies series is a psychedelic set of paintings with maximum colour, texture, line, form and accidents. The Mondrian inspired shelf, an architectural work, which appears to be a map or a tree traces the journey of an artist in search of the ‘roots’ and extremities of existence. “The classificatory mode of mapping and grid creation puts events, imagination and ruminations into a system of global knowledge, which the artist would love to deal with again and again in his works (as seen in LaVA),” he explains. 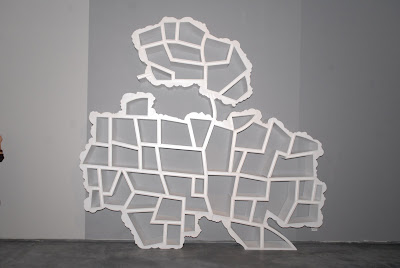 In essence, the exhibition is about reaffirming faith in oneself, introspecting and being able to stand up for one’s beliefs. At the same time, ‘NO’ as a whole is a re-looking at history. Though contemporary art does not anchor itself much on history, Bose recognizes that any art produced at any point of time cannot move away from history. The works presented in the show speak of history of the contemporary world, history of both war and peace, of both justice and injustice and above all the human beings’ die-hard fight for equal rights to live and justice.
By Nalini Malaviya No comments: