'The Unity of Opposites' by Tanya Mehta at Gallery Sumukha 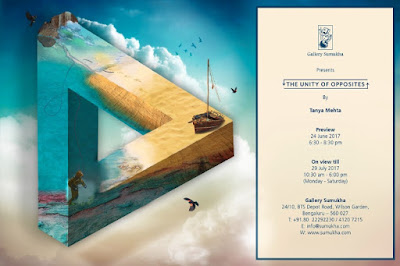 A nationally and internationally exhibiting artist, Tanya Mehta works with photography and New Mixed Media to realise her vision through technology. She explores the gaps between our different constructions of knowledge – philosophy, art, science, the metaphysical – and finds, in those gaps, bridges. She hopes to take the audience over those bridges to move to the singular reality or truth that exists for all of us. The key is the imagination.

‘Unity of Opposites’ aims to explore the differences between human perception and reality through an understanding of non-dual opposites. Using portals, circular imagery and various looping mediums to depict the infinity of the universe around us, we explore the narrowness of human perception through what we define as opposites but are, in reality, unified.

NGMA Bangalore in collaboration with BFS invites you to the screening of the films Child as an idea and image in cinema from 25th June 2017 @ 5.00 PM

CHILD
as an idea and image in CINEMA

Children are everywhere in films – the child as a figure, an idea, image, narrative - a contested site of symbolism, romanticisation and controversy. The child is an ambivalent figure flitting between endurance and despair, vulnerability and violence.

The films in this series examine the world from the child’s perspective. Here we see children who are dealing with serious situation like death, poverty, war and oppression. The films offer unique insights into these tiny minds who are witnessing and at the receiving end of harsh realities of life.

Pather Panchali is an adaptation of a 1929 novel by Bibhutibhushan Bandopadhyay. It was the first part in what became known as the Apu Trilogy, charting the life journey of a young boy in rural Bengal. Lyrical and sensitively observed, Pather Panchali documents the hardships of peasant life and the sadnesses of time passing, but doesn’t stint on the wonders and excitement of youthful discovery.

The debut feature by Andrei Tarkovsky, Ivan’s Childhood is a poetic journey through the shards and shadows of one boy’s war-ravaged youth. Moving back and forth between the traumatic realities of World War II and serene moments of family life before the conflict began, Tarkovsky’s film remains one of the most jarring and unforgettable depictions of the impact of war on children.

The protagonist Ana lives in a small village that is showing Frankenstein for the first time. While Ana wonders endlessly about the monster’s intentions, she stumbles upon a wounded revolutionary soldier who is hiding in a barn. The soldier’s death at the hands of the Francoist police, and Ana’s father’s anger over the situation lead to a strange hallucination in which Ana meets Frankenstein’s monster in the woods. Erice’s film is not only a subtle examination of Franco’s power, but it also introduces us to Ana, a dark-eyed child whose powerful gaze represented both an inquisitive youth and a rebellious spirit. Ana examines the world through an escapist fantasy, which takes her away from the realities of war. She represents the innocent generation of Spain that was unaware of Franco’s power and oppression.

The story of twelve-year-old sisters who have been kept confined in their home by their strict religious father and blind mother, who believe exposing their daughters to the outside world will lead to their corruption. It’s a film perched on the line between fact and fiction. Not only is the situation described a real one, but each of the characters in the ‘story’ is played by their real-life counterparts. When social workers force the parents to allow their daughters out into the street, the film documents the two sisters’ tentative first impressions of an outside world that’s so long been denied to them. Directed by Samira Makhmalbaf at the age of only 17, this astonishingly mature first feature combines a swipe at an oppressive society with a joyous ode to awakening senses.

This documentary is set in Sivakasi, a small town in Southern Tamil Nadu. It is from here and the surrounding villages that 70% of the requirements of the match box industry and 90% of the fireworks industry are produced. The owners of the match box and fireworks factories proudly refer to their town as “Mini Japan”, a self-employed town. This town also prints millions of garish calendars and election posters which are used all over India. Sivakasi has another dubious distinction. It is the single largest concentration of child labour in the world. Nearly 10,000 children, mostly girl children, are employed in Sivakasi to meet the demands of production. It is these children aged between 4 and 16 who are the protagonists of the film. The film is an attempt to portray their everyday lives, the production process and the complex socio-political reasons that contribute to such a large employment of children in this area.

Amshu Chukki's practice ranges from site-specific ephemeral installations to drawing, video and sculpture. In his ongoing engagements with the notion of fictionalized spaces and narratives of dystopias, he is interested in the manner in which the boundaries between the real and illusory can fold into one another, keeping in mind an understanding of the filmic and in particular, the tropes of film noir. Further, questioning the ideas of the 'site', 'site specificity' and 'site informativity', his work tries to invite and involve audiences to speculate on the meaning and nature of the fictionalized worlds brought to life.


The "People without History": Forms of Cultural Memory and the Post-Colonial Archivea lecture by
Indira Chowdhury
Scholar and Archivist, Srishti Institute of Art, Design and Technology, Bangalore

This presentation draws on my attempts over the last decade and a half to create archives of different institutions and organisations and the insights gained from these attempts into the practice of archiving. Echoing the title of Eric Wolf’s 1982 book, Europe and the People Without History (1983) and drawing on the conceptual framework of Edward Said’s Orientalism (1979), this presentation looks back at the colonial collections of archives and material culture in India and asks in what ways is it possible to put together an archive within a postcolonial context? If colonial discourse defined Indians as being steeped in backward traditions and lacking in history, what conceptual problems do we encounter when trying to assemble an archive of a formerly colonised people? Beginning with my visit to a settlement of snake charmers near Sheopur, Madhya Pradesh, who claimed they knew nothing about snakes, I go on to look at the collection of botanical paintings at Lalbagh, and the subsequent setting up of the institutional archives of the Tata Institute of Fundamental Research, Indian Institute of Management, Kolkata, The Economic and Political Weekly and the Indian Museum. What does the process of archiving tell us about our relationship to the past? In what ways did institutions that originated in the colonial period reinvent their identities post-1947? How do the colonial foundations of academic disciplines shape the way our museums relate to the past? What roles do state interventions and notions of national identity play in the evolving sense of self? Do conceptualisations of education, development and progress erase forms of cultural memory and oral traditions and create reinvented identities? This presentation will attempt to show how we might re-understand the idea of collecting an archive and the critical ways in which we might interpret them.
By Nalini Malaviya No comments: