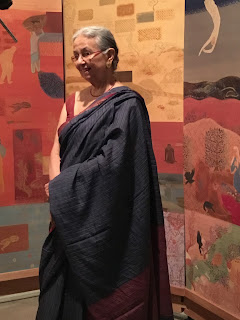 works is a scorching portrayal of the turmoil in Kashmir valley and a mystical depiction of women-centric issues, has become the first artist to get the curator’s nod for the fourth edition of Kochi-Muziris Biennale (KMB), which begins exactly a year later -- December 12, 2018.

Anita Dube, the curator of the upcoming KMB that is hosted by the Kochi Biennale Foundation (KBF), announced Sheikh’s name today, formally setting in motion the process of selection of her artists for the high-profile contemporary art event that has redefined the cultural landscape in Kerala and India.

During her over five-decade career, the 72-year-old Vadodara-based painter has produced an incredibly magnificent oeuvre, wielding her brush to make an intense depiction of subjects, with particular emphasis on Kashmir, Partition and displacement. Her strength also lies in the portrayal of grimness of contemporary life like oppressive patriarchy and the silent suffering of women that crack social fabric and she does it through use of traditional idioms and motifs.

A historian by training before she focused her attention on the canvas, Sheikh delved into the history of Kashmir, and believes that the valley’s turmoil “is owing to our lack of understanding (of the place and people there) as Indians…The artist’s role is to bear witness - to both the past and present.”

“The tender compassion in the paintings of Nilima Sheikh, in their quiet grandeur, aligns the feminine with the mystic and subversive strains in our tradition. She is a voice we must listen to, especially in these violent troubled times,” said Anita Dube.

Hailing the selection of Sheikh, KBF President Bose Krishnamanchari said, “The Kochi Biennale Foundation is thrilled that we are able to make this announcement on 12/12/17, exactly a year to the day the next edition of the Kochi-Muziris Biennale will start. Curator Anita Dube's intentions and ideas for KMB 2018 are reflected in Nilima Sheikh, the first artist she's presenting of the lineup. I can see in her choice reflections of the socially and politically sensitive aesthetics that Anita would bring to KMB-2018.”

Heavily inspired by the literary works of Rabindranath Tagore, Sheikh became interested at an early age in the connection between stories and images, between murals and ancient manuscripts. Beyond appropriating traditional techniques in her paintings, she works with figure and narration in her practice, which has famously translated into theatre sets such as Umrao as well as children’s books.

Her works are rooted in Eastern painting traditions such as miniature painting and oral traditions of vernacular folk songs. For her paintings, she drew inspiration from artists like Abanindranath Tagore, Nandalal Bose and K G Subramanyan. Through her own life experiences, Sheikh continues to create bodies of work that evoke mystical imaginary landscapes that address feminine experiences.

Her most recent work, titled Terrain: Carrying Across, Leaving Behind, was produced for Documenta 14, a leading global exhibition held in Kassel (Germany) every five years.
The artist also includes song and poetry as a performative mode of public address, echoing the 14th century female mystic Lal Dĕd of Kashmir (translated by Ranjit Hoskote), along with references to texts from several writers who have written about Kashmir such as Aga Shahid Ali and Salman Rushdie.
About Kochi Biennale Foundation

The Kochi Biennale Foundation (KBF), founded in 2010 by prominent artists Bose Krishnamachari and Riyas Komu, hosts the Kochi-Muziris Biennale (KMB), which made its debut in 2012. A non-profit charitable trust engaged in promoting art and culture and educational activities in India, it works round the year to strengthen contemporary art infrastructure and to broaden public access to art across the country. These programmes include talks, conferences, performances, educational initiatives, workshops and other forms of wide public engagement.

The KBF is also engaged in the conservation of heritage properties and monuments and the upliftment of traditional forms of art and culture.

A biennial exhibition on the best of contemporary international art, the KMB has shaped up as a seminal event in the realm of art and culture. The 108-day-long third edition of the biennale (12 December 2016-29 March 2017), held at 12 sites, showcased installations of 97 artists from 31 countries and drew over six lakh visitors.

Prominent artist Anita Dube is the curator for the fourth edition of the KMB, beginning December 12, 2018. Her selection by the KBF was in keeping with the Biennale’s long-standing tradition of being an artist-led exhibition. Based out of the National Capital Region, she is renowned for her conceptually rich, politically charged works. An art historian and critic by training and a visual artist in practice, she has been widely exhibited across the Americas, Europe and Asia, including at the first edition of the KMB in 2012.

If you found this article useful, please share it using the social media widgets at the bottom and do subscribe to receive regular updates from Art Scene India.
Also read,
By Nalini Malaviya
Email ThisBlogThis!Share to TwitterShare to FacebookShare to Pinterest
Labels: Anita Dube, Bose Krishnamachari, Kochi Biennale Foundation (KBF), Nilima Sheikh, Riyas Komu, the first artist who got the curator's nod for the fourth edition of Kochi-Muziris Biennale