Yasra Daud Khoker views Waswo X. Waswo’s exhibition ‘Sleeping through the Museum’ at Sakshi Gallery in Mumbai and is reminded of Astrid Lindgren’s popular character Pippi Longstocking, the thing-finder. Read on to see the interesting parallels she draws between the work of fiction and the exhibits.

"What did you say you are?” asked Annika.
“What’s that?” asked Tommy.
“Somebody who hunts for things, naturally. What else could it be?” said Pippi as she
swept all the flour left on the floor into a little pile.
“The whole world is full of things, and somebody has to look for them. And that’s just that a Thing-Finder does,” she finished.
“What kind of things?” asked Annika.
“Oh, all kinds,” said Pippi. “Lumps of gold, ostrich feathers, dead rats, candy
snapcrackers, little tiny screws, and things like that." 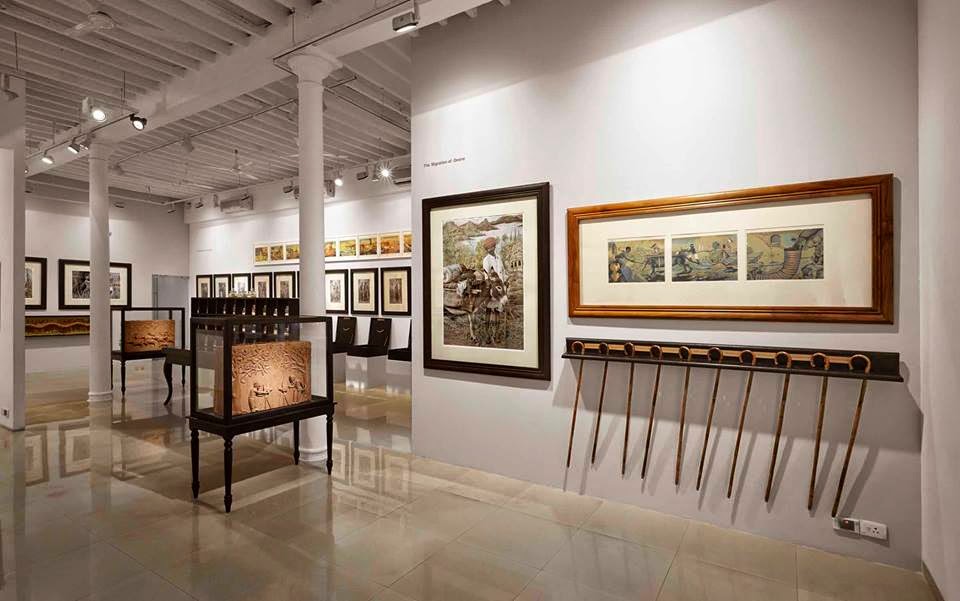 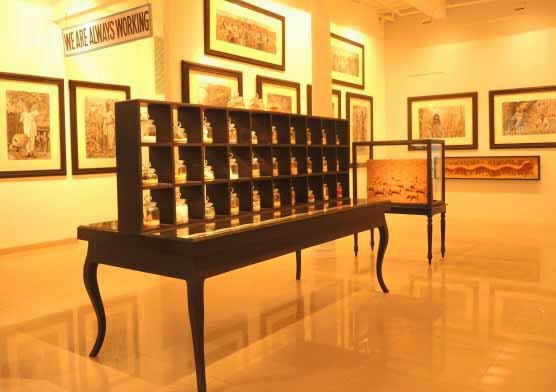 From humanity’s first and most successful adaptation - hunting and gathering, to its most popular adaptation- thing collecting, we have come a long way. As a mode of subsistence, just as our ancestors foraged for things to eat, scouring anything edible, we rake our fingers through vapors of postmodern life and a variety of things materialize like fungal growth in a forgotten jar of pickle. We feed on these by-products and remnants of memory. These things keep us going.

Thing. Things. A whole lot of things. Not just things, but things. That is what we are surrounded by. As I look around, I see a variety of things collected by me- some impulsively, some after much planning and some gifted by family and friends. Each of these things is unique and has a story that reminds me of the person I used to be and the one I am today.

Things are mute signifiers of our lives and existence, speaking much through their surface, sometimes worn-out, at other times well-kept. People generally scan items ejected from a Packers and Movers truck, attempting to paint a picture of the new neighbors. Their financial stability, family planning, pets and the dominant person in their marriage- everything about them is discussed roughly based on the things unloaded from the truck, over a routine gathering at the vegetable cart.

I am reminded of these as I flip through a booklet titled ‘Your Handy Museum Guide Book’ which accompanies Waswo X. Waswo’s exhibition ‘Sleeping through the Museum’ at Sakshi Gallery in Mumbai. Modeled after the generic spatial and visual configurations of museums with their rectilinear circulation paths, controlled movement and informatory notices, the space becomes an intended thing-asylum displaying painted photographs, labeled diagrams, terracotta artifacts and specimens in jars. Thirty glass jars arranged in a grid sit atop a surface, containing various things in paraffin and beeswax that replay memories. Remnants of a meal, a burned hat, a sliced book, crumpled piece of art etc bring Astrid Lindgren’s character Pippi Longstocking, the thing-collector to mind.

Preservation stuns time, extending the present. Nature never intended for anything to remain pristine, untouched by time -including our memory. That perhaps, is why we forget. The glass jars have imprisoned memories of things that the museum forces us to remember. One thinks a number of thoughts reading the often unnecessary, hence museum-like labels on the jars - why have these particular things been chosen for display and not others? Why do/should they form a part of history? What scattered history are these things alluding? More importantly, why is this piece of history relevant today? 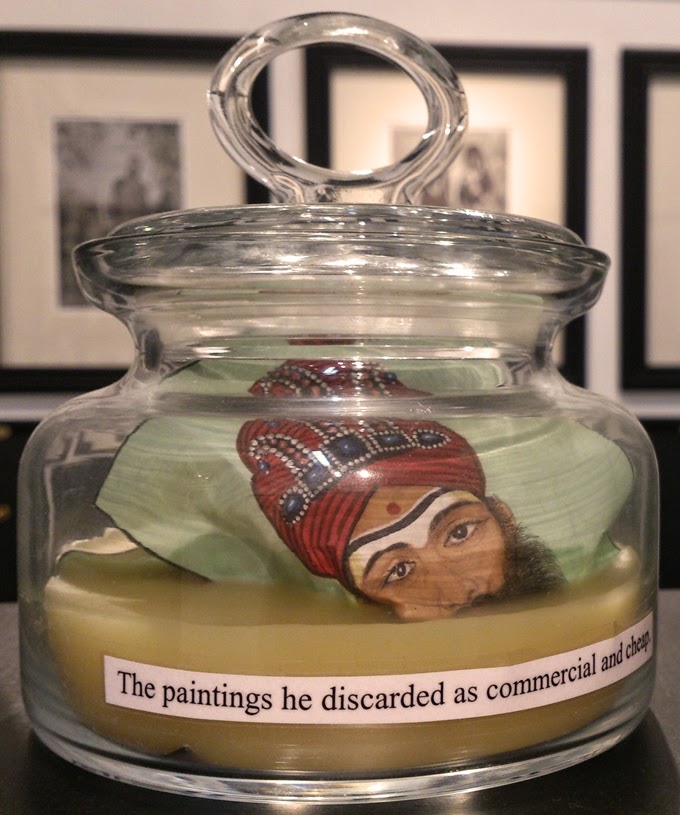 The objects in the jars play on individual imagination as one is sure to find something in his/her clutter of memories that resonates with the visual language of the exhibit (Requiem for an Other). We look at museums as preservers of history and never once question anything on display- the veracity of its claims or the authenticity of the objects. History taught at schools in different parts of the world varies. The British exploited, plundered and looted India according to Indian history but British history speaks of the ‘white man’s burden’ of civilizing the rest of the world. History is ‘his story’, a one-person perspective of events, in some cases propaganda. Museums are a part of it. In placing rather mundane objects in sparkling jars on pedestals, Waswo questions the relevance and authenticity of what we understand as history. Does our past limit itself to rugs once used by royalty and nail-clippers or clothes used by someone well-known? How about those who were always present in the faded backgrounds and sidelined in history? 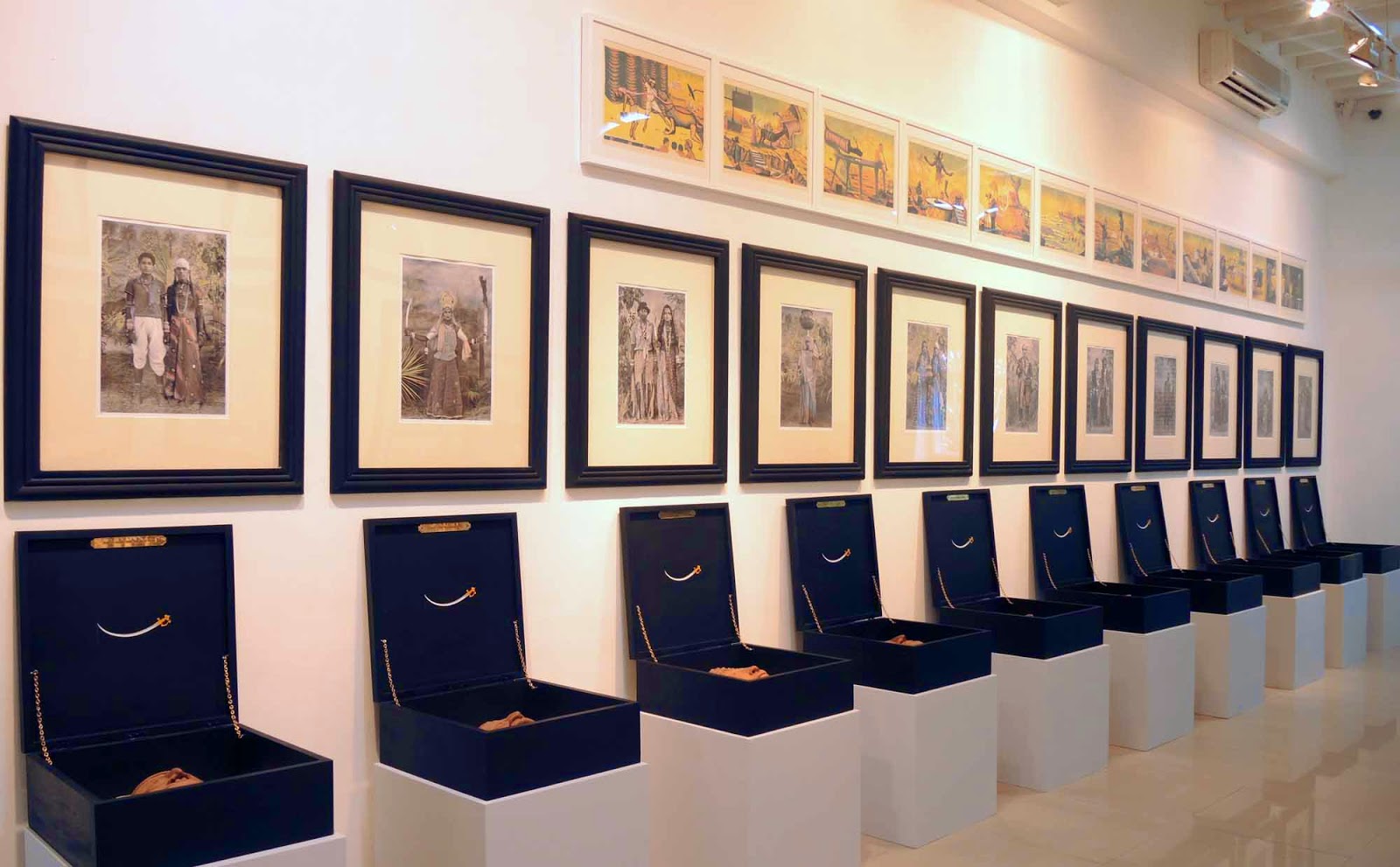 The ‘Evil Orientalist’ peeks from beneath terracotta masks crafted by village potter Shyam Lal Kumhar in such labeling as ‘a mask for our people not yours’, ‘a mask of open-mindedness’, ‘a mask demanded to be worn’ etc. The fixed, startled expressions of the masks along with hand-colored photographs from the Gauri Dancers series bring attention to the blurry lines between reality and folklore. Quite like the dancers in their heavily made-up and elaborately costumed avatar, people play a variety of characters daily. We seek to fabricate a version of the self that mimics the exaggerations of a stage play. The real and the unreal are all the same. Happiness, anger, open-mindedness, fear, ownership, authority etc are all reduced to a mask, a thing. Each of us carries many such masks everyday along with invisible jars of old sights, smells and words, clinking, making much noise. We are museums in ourselves, our faces bearing old scars and the etchings of harsh times.

Masks are societal expectations and most other such manufactured rules of social conduct that we live by, are as necessary and functional as curios and baubles. In ‘Exhibit One: Migration of Desire’, a set of ten identical walking canes rest before us. Without glancing at the labels, as a creature of habit, one thinks a cane is a cane is a cane. Apparently not. Each of the ten canes has a label informing us of its utility and character. From beating a snake to beating a dog to beating a wife. From instructing a child to walking upright to shifting homes. In the end, just a physical sign of someone’s existence. A mark that he, too, was once there. In his absence, his things speak for him, revealing much, allowing us a peek in to what he did, what he did not and hence, who he really was. How then, dear reader, is a thing, just a thing?

About the Writer: Yasra Daud Khoker is a writer of Art & Architecture, currently writing for Art & Deal and Architect Weekly. A graduate from the College of Architecture and Design of the American University of Sharjah, she writes with a special interest in Art & Architecture Theory, History and Criticism. She can be reached at yasrakhoker@yahoo.com