Veterans’ Vision, as the name suggests, presents paintings by three senior artists from Bangalore. The collection featuring recent works by CS Krishna Setty, Chandranath Acharya and U Bhaskar Rao, encapsulates their unique visual vocabulary and individual voices, ranging from intimate and societal fantasies and apprehensions to vignettes from mythology and tradition.


Krishna Setty’s metaphorical visuals interlace complex narratives around contemporary concerns. The forceful surrealistic imagery from his previous series has undergone transformation and depicts a perceptible shift towards abstraction. The hybrid creatures have receded and the recurring motifs and symbols have acquired ambiguous connotations, and are often hieroglyphic. 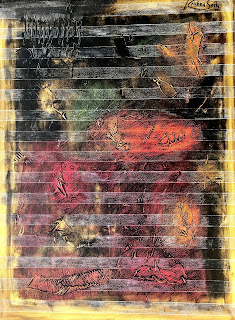 The mix-media works display significant textures and patterns, employed as an aesthetic device, and are remnants of the artist’s printmaking practice. The ambiguity of the hieroglyphs allows multiple readings into humanistic and existential angst, at the individual and a larger societal level. Fossilized remains or perhaps birthing grounds of indistinct forms, represent dreams or desires to form crucibles of compound visuals and narratives. The intense landscape generated, eerie and ethereal is disquieting, an infinite cauldron of life and consciousness with its associated anxieties.

Chandranath Acharya’s satirical commentary on the present political, social and psychological spectrum is situated at the threshold of fantasy and reality. His visual idiom combines a rare witticism with playfulness and surrealistic imagery. Royal figures, resplendent and clad in jewels and finery, indulge in ordinariness, a juxtaposition of opulence with the mundane, with undercurrents of satire and humour. 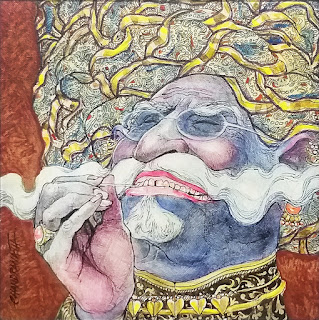 Larger than life figures, surrounded by fantastical objects and creatures, form imposing portraits filled with pomposity, absurdity and grandeur. Decadence and mortality come together in a single frame with incongruous imagery, in incredibly sumptuous detail. Human conditions and emotions in all its exuberance, transience and intricacies, are portrayed adeptly with an underlying sense of mischief and tenderness. His extensive work in illustration and printmaking are clearly evident in the paintings.


Bhaskar Rao’s protagonists are primarily derived from mythology and visual and performing culture. These often narrate specific and recognizable instances and episodes, chronicling fragments of oral traditions and culture. Rooted in realism, with stylised and illustrative forms, vignettes from native landscapes, myths and mythology and traditions and rituals, etched in memory through time, are represented on the canvas. 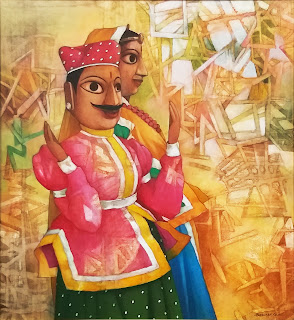 The puppets form a popular leitmotif in his narration, a juxtaposition of the inanimate with the sentient and as an instrument of storytelling. Performance as an expression of human nature, culture and experience, and its associated connotations with social, philosophical and spiritual perspectives acts as a symbol of representation.

The exhibition continues till September 22 at Fidelitus Art Gallery, Bangalore

All images courtesy the artists and gallery

Excerpted from the catalogue text by Nalini Malaviya