Suresh Kumar, an artist and self-appointed documentarian has documented several years of the Bangalore art scene, when collective groups and spaces were at a nascent stage.
Suresh Kumar of Samuha fame, who most people in Bangalore will recall had initiated a collective project run in 2009 in Bangalore, where over a period of one year a number of artists had slots for exhibitions in a space that was collectively rented. The project was widely appreciated and Suresh went on to present his ideas and vision about Samuha on various fora. Then, Suresh went on to video record events in Bar1, Chitrakala Parishad and Ananya Drushya (you can read more about this initiative here).

Calling it the Perfumes project, Suresh explains, “I was trying to present Bangalore artists and the scene online in a more organized way. The name Perfumes is a combination maybe of Performance and an idea of a bouquet…”

Suresh writes a detailed introduction on how he took up the role of a documentarian and how he views the current art scene, especially in Bangalore. He laments about the current state of art matters, how art students are going back to their native towns after graduation and how Suresh had to step up and adopt the role of a ‘recordist’.

He has recorded events at Samuha, Jaaga, 1Shanthi Road and the government-owned Venkatappa Art Gallery. You can read about his experience here and then follow the link to view the videos here.
By Nalini Malaviya No comments:

An evening with JMS Mani

Last week I went for Ananya Drushya’s interactive session with the artist of the month. This month features JMS Mani, who most of you will know from his very popular ‘Badami’ series. Mani was invited to talk about his art and events that have shaped his artistic career. Initially reluctant to speak, Mani did talk at length about his early days with RM Hadpad (Founder of Ken School of Art), his exposure to different media, making prints, turning down a seat at the MS University, Baroda (which he admitted he regrets sometimes) and so many other lesser known facts associated with his life. He sportingly shared anecdotes that were not only delightful but refreshingly honest and sans frills. Such a pity that there were so few of us in the audience! Fortunately, (SG) Vasudev felt the need to repeat the interactive session at a later date and hopefully it will happen again sometime this month.Incidentally, Mani studied and then taught at Ken School of Art and retired from there as the Principal recently. The prints of his works that were on exhibit offered a valuable insight into his growth as an artist – lithographs, drawings and paintings from his early days to the present were on display. As Vasudev pointed out, Ananya attempts to showcase a retrospective wherever possible. I liked Mani’s early black and white works much more than the colourful men and women from the ‘Badami’ series. But, it so happens that this series is what defines him. The rustic appeal and the apparent spontaneity of vibrant colours in these paintings draw the viewer. 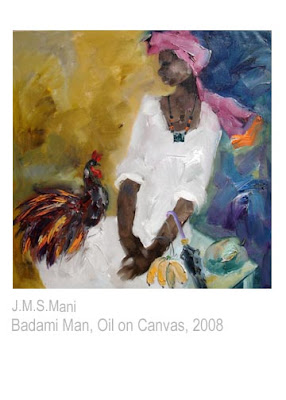 For so many successful artists this can be such a vicious trap – they are forced to paint what the buyers want, but then critics pan them for repeating their works and not trying out anything new. A Catch 22 situation for them, don’t you think? Maybe sometimes we are too quick in judging artists; it helps to remember that at the end of the day this too is a profession for them. Artists also need to make ends meet and have families to support.
But then, I find artists today are much more experimental in their approach and are willing to take risks. If you look at the results of a few past auctions, what stands out is that contemporary artists who are trying out different media and genre are doing exceptionally well.
By Nalini Malaviya No comments: