Spurts of Enigma: Nikhil Purohit writes on the art practice of Mohan Shingne

An artist with formalist fervor operates both as an agent and a vessel for creation. Contemporary Indian art today is a mix-bag of several ideas from world art merged with indigenous aesthetic blends. It liberates an artist like Mohan Shingne to cross the roads with ideas of modernist abstraction and impulsive sculptural responses to a medley of found objects imparting meanings to resulting objects. 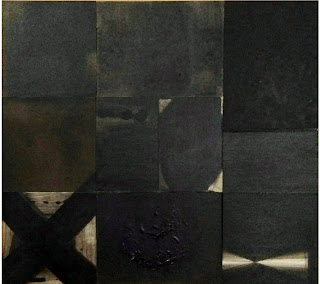 A nuanced rendition through self-experienced perspective is the notion one ought to look for the works of Shingne rather than novelty. The artist has a dedicated hybrid practice. Firstly, of making sculptures with a conscious thematic of collaging shapes and found objects. Secondly, of paintings worked out as a process of self-exploration like an ardent devotee revealing the inner workings of a contemplative mind. He holds an intimate attachment to his role as an art educator besides following sculpting and painting as primary modes of expression.

With a humble upbringing in a family of goldsmiths, Mohan’s small and life size sculptures carry the craftsmanship and flair for detailing with a remarkable finesse. Poetry for him becomes a source for insinuating his feelings towards the inanimate world around that catches his attention. Words seem to be a storeroom to accumulate his notes for later visual conversions as idioms. It allows to gain a sense of Zen like feeling to learn how objects- mostly rustic, aged, and redundant become one with his psyche and finally at an immersive moment the object is released into a sculpture or flat surface. With a share of hardships in his early life the phase gifted him with a connect toward wordless conversations with things around. A link that has lent subtlety to his paintings and harmony to his 3D objects.

All this process hints at romance with formalism, yet Shingne finds gaps to escape rigidity in practice and breakthrough from monotony by experimenting with the found objects, clubbing them together. He happens to follow a formula of an uncanny juxtaposition where “Form + Form = Form, Form - Form=Form”. Perhaps the equation is an inert one where the principal element always stays. A philosophical take where the utilitarian thought in the object is discounted to abate a metaphor with mysticism. The set of new achromatic works made during the nationwide COVID-19 pandemic lockdown period instills mixed feelings of emptiness, seclusion, loneliness, remorsefulness, silence, hope, and perseverance. The general theme of the series in dark shades with subtle textural notes has rectangular divisions annotated with few rhythmic curves breaking the grid formation. This releases the built-in tension formed after continuously watching the work. These works almost remind the ravishing paintings of veteran artist Jeram Patel, though the method of covering the space takes a different visual course. The underlying organic forms are nothing but triggers to melody.

One sculptural collage arouses satire and amuses us. The cylinder works were made by him before the onset of second wave where one could barely imagine how the situation could turn to be grave medically. Hailing from the goldsmith’s family these cans are part of his families’ occupational supplies. Mohan made use of these empty cans to revise their identity by introducing commonplace objects. The juxtaposition can only be admired by the viewer for the ease of mix-match where the two unrelated objects of a can and those of a buttermilk churner, a bowl, and an oil lamp respectively are bonded together. The experimenter within the artist allows spurts of delight and ecstasy.

Faithfully abiding by the tenets of formalism Mohan’s works continue to entice enigma.
Tattvamasi by Mohan Shingne, a Solo Show of Paintings and Sculpture continues till 10th December 2021 at Shridharani Art Gallery, New Delhi
Please share this article using the social media widgets at the bottom and do subscribe to receive regular updates from Art Scene India.


To contribute articles, please get in touch at artsceneinfo@gmail.com